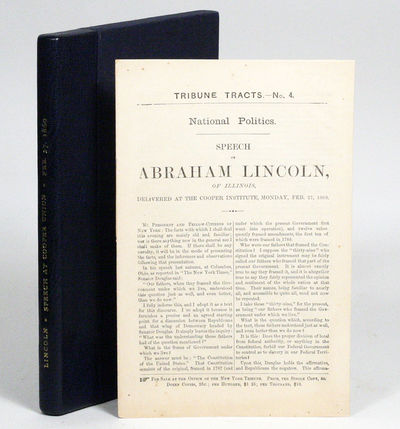 by LINCOLN, ABRAHAM
New York: New York Tribune, 1860. First edition. Original wrappers. Very Good. FIRST EDITION of Lincoln's historic Cooper Union Address, delivered on February 27, 1860 at the Cooper Institute in New York. The speech is largely credited to having launched Lincoln's Presidential bid. In the fall of 1859, James A. Briggs, who served on the lecture committee of the Plymouth Church in Brooklyn, invited presidential candidate hopeful Abraham Lincoln to speak to a New York audience on any subject of his choosing. Lincoln accepted the invitation, choosing to speak of the current political climate in America. William O. Stoddard, an Illinois journalist who worked for President Lincoln during his administration, noted that "No previous effort of his life cost him so much hard work as did that Cooper Institute speech" and that the resulting speech "was a masterly review of the history of the slavery question from the foundation of the government, with a clear, bold, statesmanlike presentation of the then present attitude of parties and of sections. It exhibited a careful research, a thorough knowledge and understanding of political movements and developments, that staggered even the most laborious and painstaking students. It showed a grasp, a breadth, a mental training, and a depth of penetration which compelled the admiration of critical scholars" (Stoddard, Abraham Lincoln: The True Story of a Great Life).

"Horace Greeley had rushed out the speech in pamphlet form as 'Tribune Tract' Number 4, under the headline: National Politics. Speech of Abraham Lincoln, of Illinois, Delivered at the Cooper Institute, Monday Feb. 27, 1860. The pamphlet was ready March 6, while Lincoln was still traveling through Connecticut. When he returned to New York, he found it already available to the public.

"It was as if Republicans were now speaking with one voice: identifying with the founders, attacking the Dred Scott decision, rebuking John Brown, and drawing their own 'dividing line' on slavery extension. Lincoln did not say it alone; but he said it best... 'Mr. Lincoln's is probably the most systematic and complete defense yet made of the Republican position with regard to Slavery,' the Tribune declared in its initial advertisement for the reprints. 'We believe no speech has yet been made better calculated to win the intelligent minds over to our standard. Will the friends of the Cause everywhere aid us to circulate it?'

"The answer was yes. The Tribune Tract edition proved enormously popular, going through at least five additional editions... [Lincoln's] New York oration was enjoying a new and sustained life in pamphlet form, and was being purchased, individually, and in bulk alike, by admirers and groups across the North.

"The Cooper Union address tested whether Lincoln's appeal could extend from the podium to the page, and from the rollicking campaigns of the rural West to the urban East... Cooper Union held the promise of transforming Lincoln from a regional phenomenon to a national figure. Lincoln knew it, and rose to the occasion." (Harold Holzer, Lincoln at the Copper Union: The Speech That Made Abraham Lincoln President).

New York: New York Tribune, Tribune Tracts, No. 4, 1860. Octavo, original wrappers; custom box. Lincoln's speech comprises pages 1-11 (out of a total of 16 pages). With New York Tribune ads and subscription terms on rear wrapper. Only a spot of soiling in the bottom margin of the rear wrapper (creeping lightly into preceding leaves). A beautiful copy in a remarkable state of preservation. RARE. (Inventory #: 2444)
$8,500.00 add to cart or Buy Direct from
Manhattan Rare Book Company
Share this item