Snapshots of Denver, Colorado At the Turn of the Century [Early 20th Century Photo Album] 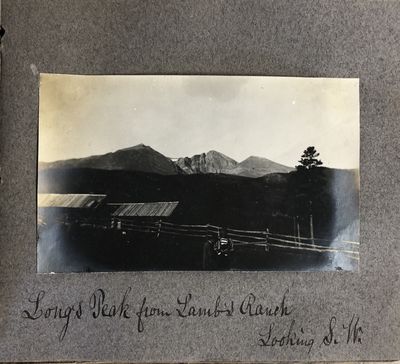 Small but excellent album of Denver and surrounding area circa 1901. Album contains 55 photographs; 53 are silver gelatin, 2 are cyanotypes. Flexible suede album covers with amateur tooling on front; string bound. Album covers measure 5 ½" x 6". Photos measure between 2" x 2" and 3" x 4 ½" but most are 3" x 4". Photos are glued on grey album leaves and all are captioned in black ink. Album covers have light wear and soiling; first leaf with two photos is detached from album. Most photos have light silvering around edges; 6 have moderate image fading and deterioration. Overall very good. This sweet album portrays early 20th century life in Denver, Colorado when the area was comparatively quiet to today's bustling city. There are 8 portraits of members of the Jackson family in the album: the parents, Edward and Emily Jackson, and the children, Ethel, Robert, Thomas, Helen and Herbert. Edward Jackson was a Professor of Ophthalmology at Colorado University in Denver. He moved his family from Philadelphia to Denver in 1894 when his first wife, Jennie L. Price, contracted tuberculosis. Jennie was the mother of Ethel, Robert and Thomas. After she passed away he married Emily Churchman, who was the mother of Helen and Herbert. Captions indicate that the album was likely compiled by a visiting cousin and member of the Price family. Most of the images were from excursions taken by the family showing the iconic buildings and scenery of Denver. Captions read: Clear Creek Valley above Empire, Herbert & Helen-Corona School in background, Helen's first day on skates - City Park, 12-28-1901, Mount Grand from the North, Robert on top of Long's Peak, Long's Peak from Lamb's Ranch looking S. W. , School House in the foothills of Fort Collins, Top of Horse Tooth Mountain near Fort Collins, Boulder & the Plains from side of Green Mountain, Top of the Morrison Rocks looking E. Over the Plains, McPhee Building, County Hospital, Court House, Brown Palace Hotel, and the State Capitol. There are 3 photos (2 of these the cyanotypes) that depict the family and tents set up in a wilderness; they are captioned "the Jackson Tents at Grant." There are also scenes of houses in Denver (Eighth Ave, Agate Ave, and Ogden Street) and sweet views of parlors, kitchens and living rooms that provide an intimate look into the lives of a family in the early 20th century. An excellent album for the Colorado collector. . (Inventory #: 022617)
$350.00 add to cart Available from
Back of Beyond Books
Share this item

Teton Mountains: Their History and Tradition

Civil War in Arizona: the Story of the California Volunteers, 1861-1865

Norman, OK : University of Oklahoma Press , 2006
(click for more details about Civil War in Arizona: the Story of the California Volunteers, 1861-1865)
View all from this seller>