Speech of Mr. Rudyard Kipling As Chairman at the Annual Dinner of the Artists’ General Benevolent Institution on May the Ninth, 1907. 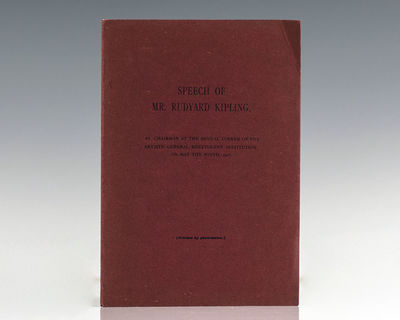 by Kipling, Rudyard
[London]: Privately Printed, 1907. First edition of this scarce privately printed pamphlet documenting Kipling's Speech at the Annual Dinner of the Artists' General Benevolent Institution on May the Ninth, 1907. Octavo, original wrappers. One of only 25 copies printed with Kipling's permission. With the printer's circular signed in facsimile laid in. Scarce, only five copies have appeared at auction in the past 85 years. English journalist, short-story writer, poet, and novelist Rudyard Kipling's major works include The Jungle Book (1894), Kim (1901) and many short stories and poems. Kipling was born in India, which inspired much of his work and his innovative stories for children have become timeless classics. Kipling was one of the most popular writers in the British Empire, in both prose and verse, in the late 19th and early 20th centuries and was awarded the Nobel Prize in literature in 1907. (Inventory #: 122830)
$400.00 add to cart or Buy Direct from
Raptis Rare Books
Share this item