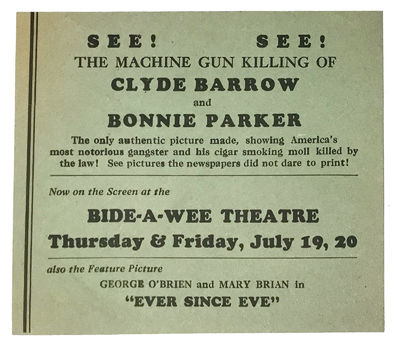 by [EPHEMERA]; Barrow, Clyde; Parker, Bonnie
Denver, Colorado: Bide-a-Wee Theatre, 1934. Sensational handbill issued by Denver's Bide-a-Wee Theatre, promising a true crime special feature: "See! See! The Machine Gun Killing of Clyde Barrow and Bonnie Parker. The only authentic picture made, showing America's most notorious gangster and his cigar smoking moll killed by the law! See pictures the newspapers did not dare to print!" The deadly police ambush of Bonnie and Clyde was not captured on film, although a deputy on the scene did record their bullet-riddled Ford (and bodies) after the dust settled. The feature advertised on this handbill is most likely "The Retribution of Clyde Barrow and Bonnie Parker," a hastily assembled 1934 montage of archival footage and dramatic reenactments, including the promised "machine gun killing," produced by the Dallas-based Jamieson Film Company. A remarkable survival, testifying to the enduring American appetite for true crime narratives. Theatrical handbill, measuring 4.5 x 5.25 inches. Printed recto only on pale green paper, faded at left edge. (Inventory #: 1002930)
$250.00 add to cart or Buy Direct from Honey & Wax
Share this item
Honey & Wax Booksellers
Offered by

Alexander's Feast, or The Power of Music. An Ode for Saint Cecilia's Day 1697

Wellingborough : Christopher Skelton at The September Press , 1985
(click for more details about Alexander's Feast, or The Power of Music. An Ode for Saint Cecilia's Day 1697)

Children at the Gate

London : Chatto & Windus , 1968
(click for more details about Children at the Gate)
View all from this seller>