A political manual for 1866, including a classified summary of the important executive, legislative, and politico-military facts of the period, from President Johnson's Accession... and containing a full record of the action of each branch of the government on reconstruction 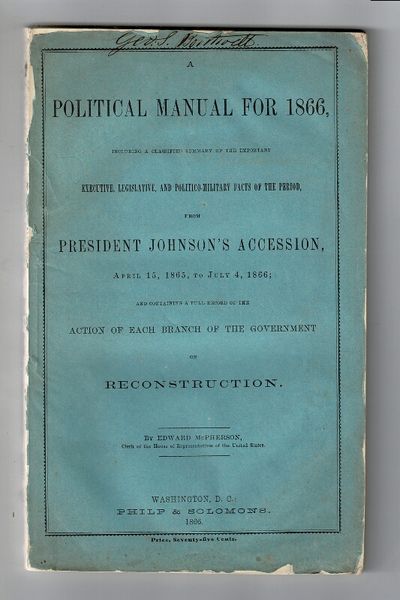 by McPherson, Edward
Washington DC: Philip & Solomons, 1866. First edition, 8vo, pp. [4], 128; original blue printed wrappers; spine mostly perished, wrappers starting, with some shallow chipping, lower wrapper creased, text clean and sound. With the signature of George S. Boutwell on upper wrapper. George S. Boutwell was a prominent Northern abolitionist, and at the time of this printing was serving as a member of the House for Massachusetts. He also served as a Senator, as Governor of Massachusetts and as Secretary of the Treasury under President Grant. He was a Radical Republican during the reconstruction era, arguing for Black American suffrage, and encouraging strong responses to Klan violence, but also suggested that giving Blacks greater freedom would prevent them from moving North. An official account of Reconstruction owned by one of the men directly involved in its planning. (Inventory #: 58289)
$230.00 add to cart or Buy Direct from
Rulon-Miller Books
Share this item