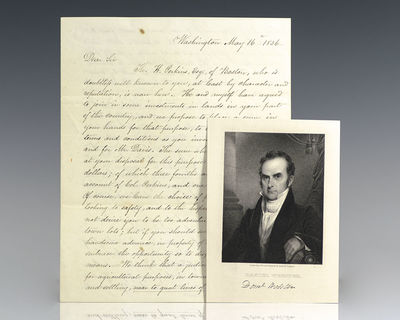 by Webster, Daniel
1836. Rare autograph letter signed by one of the most prominent American lawyers of the 19th century, Daniel Webster written in anticipation of the opening of the American west. One page, folded, text in the hand of an amanuensis, the letter stipulates which types of land Webster and Perkins wish the recipient, Joseph R. Williams of Toledo, Ohio, to invest in with their $5,000 speculative fund. The reads in part, "Washington, 16 May 1836 Dear Sir, Mr. H. Perkins, Esq. of Boston, who is doubtless well known to you, at least by character and reputation, is now here. He and myself have argued to join in some investments in lands in your part of the country, and we propose to place a sum in your hands for that purpose, to be invested on the same terms and conditions as you invest other funds for me, and for Mr. Davis. The sum which we propose to place at your disposal for this purpose is five thousand dollars; of which three fourths are to be invested for account of Col. Perkins, and one fourth on my account. Of course, we leave the choice of places to your discretion, looking to safety, and to the hopes of profit. We would not devise you to be too adventurous, in regard to town lots; but if you should see a good prospect of a handsome advance, in property of that kind, you will embrace the opportunity so to dispose of part of lands for agricultural purposes, in townships already settles and settling, near to great lines of communication, and taken up at Government prices, cannot well fail to produce handsome returns on the capital. Still we should be very glad if you could make a lucky hit, at some point where the land should soon be wanted for town purposes, or where it would be met by some canal, or other improvement, which should enhance its value... As to the mode of remittance, we have thought of no better way than for you to draw on me. I shall be in this city until the early part of Jun, perhaps later, and then in Boston... As commercial transactions in your quarter may enter in New York and Philadelphia, your Bills on me may be made payable either at Boston, or at the Merchants Bank in the city of New York, or the Bank of the United States at Philadelphia... You will of course write me, on the receipt of this. You will see what day shall be fixed on for the adjustment of Congress and may take it for granted that I shall be here till about that time...." Signed at the conclusion by Webster, "with regards, Yr obedient Serv, Daniel Webster'. Additionally signed "Joseph R. Williams Esq Toledo" and "approved & agreed to by me Th. Perkins". The spring and summer of 1936 saw the admission to the Union of Arkansas and Michigan as the 25th and 26th states, respectively, and the organization of the Wisconsin Territory, essentially opening the American West as the next urban frontier. In near fine condition. Accompanied by an etched portrait of Webster. American lawyer and statesman Daniel Webster represented New Hampshire and Massachusetts in the U.S. Congress and served as the U.S. Secretary of State under Presidents William Henry Harrison, John Tyler, and Millard Fillmore. As one of the most prominent American lawyers of the 19th century, he argued over 200 cases before the U.S. Supreme Court between 1814 and his death in 1852. During his life, he was a member of the Federalist Party, the National Republican Party, and the Whig Party. During the Mexican-American War, he emerged as a leader of the "Cotton Whigs," a faction of Northern Whigs that emphasized good relations with the South over anti-slavery policies. In 1850, President Fillmore appointed Webster as secretary of state, and Webster contributed to the passage of the Compromise of 1850, which settled several territorial issues and enacted a new fugitive slave law. (Inventory #: 124353)
$1,250.00 add to cart or Buy Direct from
Raptis Rare Books
Share this item