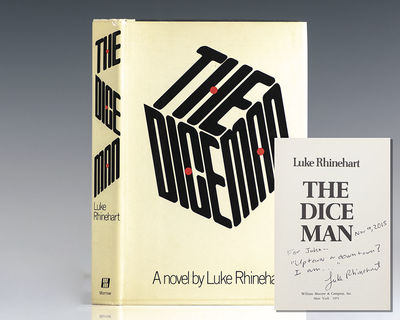 by Rhinehart, Luke [George Cockcroft]
New York: William Morrow and Company, 1971. First edition of this cult classic. Octavo, original cloth. Presentation copy, inscribed by the author on the title page, "For John- 'Uptown or downtown? I am...' Luke Rhinehart Nov 9, 2015." The inscription refers to the final line of this novel. Fine in a near fine dust jacket with a touch of rubbing. Jacket design by Lawrence Ratzkin. The Dice Man is a novel published in 1971 by George Cockcroft under the pen name Luke Rhinehart and tells the story of a psychiatrist who begins making life decisions based on the casting of dice. Cockcroft wrote the book based on his own experiences of using dice to make decisions while studying psychology. The novel is noted for its subversion, anti-psychiatry sentiments and for reflecting moods of the early 1970s. Due to its subversive nature and chapters concerned with controversial issues such as rape, murder and sexual experimentation, it was banned in several countries. Upon its initial publication, the cover bore the confident subheader, "Few novels can change your life. This one will" and quickly became a modern cult classic. The book went through a number of republishings; in the United States it acquired the even more confident subheader "This book will change your life", in spite of its being a highly edited version of the original. In 1995, the BBC called it "one of the fifty most influential books of the last half of the twentieth century," and in 1999 Loaded magazine named it "Novel of the Century". In 2013, the Telegraph listed it as one of the 50 great cult books of the last hundred years. It has enjoyed a 21st-century renaissance, being published or republished in more than 60 countries and translated into 26 languages. (Inventory #: 124924)
$2,500.00 add to cart or Buy Direct from
Raptis Rare Books
Share this item