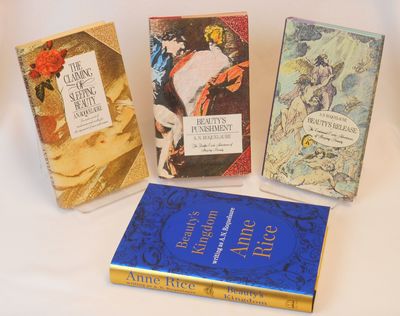 by Roquelaure, A.N. [nom-de-plume, Anne Rice]
New York: E.P. Dutton, Inc. / Viking Penguin, 1983. First Edition. Hardcover. Fine/fine. First printing (see below for dates and specifics on the subsequent three volumes), all octavo size, 1132 total pp., [first and third volumes] signed by the author using both names, [second volume only] signed as "Anne Rice" The "Beauty" series, by Anne Rice (b. 1941), published under her nom de plume of "A.N. Roquelaure", has brought the world of unconventional sex into the reading rooms of millions and becoming a huge commercial success. Although viewed by some as nothing but pornography, others disagree; Anne Rice herself "firmly believed that women should have the freedom to read and write whatever they pleased, and considered the trilogy her political statement."

As is stated on the "official" Anne Rice website, "Her re-telling of the Beauty story probes the unspoken implications of this lush, suggestive tale by exploring its undeniable connection to sexual desire." The books have become the subject of study, with one university professor stating "that rewriting the myth of Sleeping Beauty as sadomasochistic fantasies enabled Anne Rice to explore 'liminal areas of experience that could not be articulated in conventional literature, extant pornography, or politically correct discourse'." (n.b., both of the above quotes from Wiki.)

It was only after the first three novels were published, in 1990, that Anne Rice was revealed to be the author behind "A.N. Roquelaure"; that name was chosen as it is the French word used in the 18th century for a cloak worn by men.

___CONDITION: Overall the set is fine, in fine dust jackets. Each volume with clean boards, straight corners without rubbing, strong, square text blocks with solid hinges, the interiors are clean and bright, and the set is entirely free of prior owner markings; each volume clean, crisp, and as new. The dust jackets are all unclipped, all clean, all with bright, deep colours (no sunning), and mostly free of noticeable edgewear; "Claiming" with some light creasing at the tail of the spine, "Punishment" with light wear at the corners (where the flaps meet the panels), with a small chip at the top front corner; overall a fine set, with the first three volumes all signed by the author, two of the three with her signature using both names.

___Swan's Fine Books is pleased to be a member of the ABAA, ILAB, and IOBA and we stand behind every book we sell. Please contact us with any questions you may have, we are here to help. (Inventory #: 21032105)
$990.00 add to cart or Buy Direct from
Swan's Fine Books
Share this item

[Six Sonnets - wrapper title] Sonnets Preceding the Inferno, Purgatorio, and Paradiso of the Comedy of Dante Alighieri of Florence by Henry Wadsworth Longfellow

The Shrinking of Treehorn

New York : Holiday House , 1971
(click for more details about The Shrinking of Treehorn)
View all from this seller>