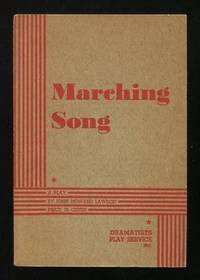 by Lawson, John Howard
New York: Dramatists Play Service. Very Good+. 1937. First Edition. Softcover. [nice clean copy, with just a bit of wear along the spine]. (B&W photo frontispiece, stage diagram) Politically-themed play about a sit-down strike in an automobile factory. A scarce work by Lawson, his last before abandoning the stage for good in favor of Hollywood (he had actually moved back and forth between writing for theatre and film during the 1930s). As scholar Bernard Dick has pointed out, it was also the first play of Lawson's in which he put his own fully-formulated theories of dramatic writing -- published the year before, entitled "Theory and Technique of Playwriting" -- into practice. In this play, Dick states, Lawson's "politics and poetic merge in what is, structurally, his best play." The New York Times theatre critic Brooks Atkinson had rather a different opinion, dubbing the play "a bewildering splutter in many directions, [in which] vagrants, lovers, housewives, police, patronizing representatives of capital, labor union racketeers, strike leaders, finks and everyone else in the neighborhood scamper nimbly through [the] play and talk at length with gusto." The original New York production had a modest 61-performance run; notable among the cast members were Rex Ingram as an African-American factory worker and Frances Bavier, later beloved as "Aunt Bee" in the Andy Griffith TV series. . (Inventory #: 26815)
$100.00 add to cart Available from ReadInk
Share this item
ReadInk
Offered by