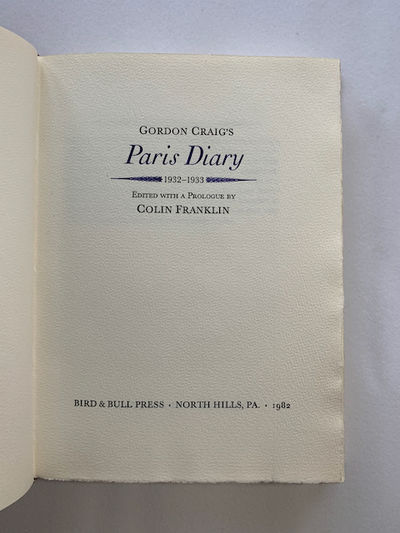 by Edward Gordon Craig (1872-1966)
North Hills, PA: Bird & Bull Press, 1982. First Edition. Hardcover. Very Good/Very Good. 8vo. 8 1/2 x 6 1/4 inches. 154, [2] pp. Half-title, title page printed in black and dark blue inks with small typographic ornamental rule, 2 color illustrations of the manuscript diary tipped-in, typographic ornamental rules at section heads, zodiac symbols for the months in various colors at the head of each month; text clean, unmarked. Brown leather spine, decorative paper over boards, leather tips, gilt-ruled and titled dark brown leather spine label, clear plastic dust-jacket; binding square and tight, top edge lightly dust-soiled, jacket with minor chips and tears. JWG421-001. Very Good. LIMITED EDITION of 350 numbered copies, this is number 99, composed in Baskerville types at Mackenzie-Harris Corp, printed on mouldmade Bugrabutten paper, bound by Gray Parrot, and printed at the Bird & Bull Press. This is the first time this diary has been published. Gordon Craig was born Edward Godwin, the illegitimate son of the architect Edward Godwin and the Actress Ellen Terry. He took the surname Craig by deed poll at age 21. He was an English modernist theater practitioner who worked as an actor, director, and scenic designer who also contributed theoretical writings about the stage. This diary was written in Paris when Craig was about sixty years of age, about the time that Adolf Hitler was rising to power in Germany, and Craig's active career in the theater was pretty much over. Craig intended this diary for publication, but this is the first time it has appeared in print. "This manuscript is a unique personal document for the greatest importance concerning the theatre. It covers a whole year of Craig's life at a time when he was very much 'in the wilderness.' Much of it is concerned with the efforts of a group of people in Holland, who were then trying to found some sort of theatre school/center for him. While money worries and health worries abound, the prevailing impression is yet one of unquenchable optimism and enthusiasm, and an unflagging interest in the theatre and all concerned with it; the love and care he expended in building up his collection, above all his brochures which he calls 'opuscules,' and friendships of every sort, the famous and humble people alike. While there are petulant (and sometimes unprintable) remarks about this or that celebrity, there is above all a spirit of generosity of mind in the things that mattered to him." Lee Freeson, quoted in Colin Franklin's Prologue. (Inventory #: JWG421-001)
$70.00 add to cart Available from
John Howell for Books
Share this item

One Hundred Books Famous in Typography

New York, NY : The Grolier Club , 2021
(click for more details about One Hundred Books Famous in Typography)
View all from this seller>