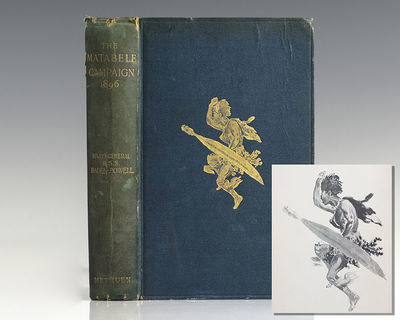 by Baden-Powell, Robert
London: Methuen & Co., 1901. Fourth edition of Baden-Powell's authoritative work on the Matabeleland Rebellion. Octavo, original gilt-stamped cloth, illustrated, tissue-guarded frontispiece. In very good condition. The Second Matabele War, also known as the Matabeleland Rebellion or part of what is now known in Zimbabwe as the First Chimurenga, was fought between 1896 and 1897 in the region later known as Southern Rhodesia, now modern-day Zimbabwe. It pitted the British South Africa Company against the Matabele people, which led to conflict with the Shona people in the rest of Southern Rhodesia. (Inventory #: 124892)
$125.00 add to cart or Buy Direct from
Raptis Rare Books
Share this item