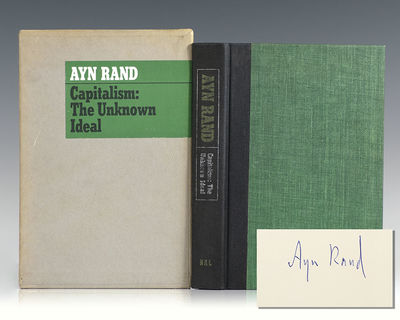 by Rand, Ayn; Essays by Nathaniel Branden, Alan Greenspan, and Robert Hessen
New York: New American Library, 1966. Signed limited first edition of this collection of essays--which Rand, in her introduction, characterizes as "a nonfiction footnote to Atlas Shrugged." Octavo, original half cloth. Boldly signed by Ayn Rand. Near fine in a near fine slipcase. With additional articles by Nathaniel Branden, Alan Greenspan, and Robert Hessen. This collection of 26 essays includes twenty by Ayn Rand as well as three essays by Alan Greenspan, two by Nathaniel Branden, and one by Robert Hessen. "One of the best defenses and explanations of capitalism one is likely to read" (Walter E. Williams). (Inventory #: 124803)
$1,850.00 add to cart or Buy Direct from
Raptis Rare Books
Share this item