Section of the Map of the States of Kansas and Texas and Indian Territory, with Parts of the Territories of Colorado and New Mexico 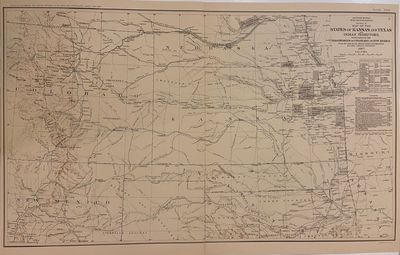 by BIEN, Julius; War Dept. Engineer Bureau
New York: Julius Bien & Co.; US War Department, 1867. Map. Color lithograph. Image measures 16 1/2" x 27 5/8" This fascinating map shows the Great Plains region in 1867, and is one of the earliest Army surveys of the area. Originally published in two sheets, this plate features the northern portion of the map, as published in "Atlas to Accompany the Official Records of the Union and Confederate Armies (1861-1865)". Shows numerous Native American tribes, including Choctaw, Chickasaw, Creek, Cherokee, Delaware, Pottawatomie, Sac and Fox, Otoe, Pawnee, Cheyenne, Arapahoes, Koiwas and Comanches, and Jicarillo Apaches. The maps show rivers, canals, towns, roads, and railways, as well as positions and routes of both armies, with blue lines for the Union and red for the Confederate forces. Relief is shown by both hachures and contour lines. Minor tears at margins, not affecting the image. This map is a wonderful piece that boldly documents American history. Julius Bien (1826-1909) was an American lithographic printer and cartographer based in New York City. During the course of the second half of the 19th century, he produced thousands of maps for both public and private publishers. Some of his most notable commissions were for the U.S. government, including many geological maps that redefined the cartographic visualization of geology. Bien's prolific output and contributions to the development of chromolithography make him one of the most significant map printers of his time. (Inventory #: 300277)
$250.00 add to cart or Buy Direct from
Argosy Book Store
Share this item