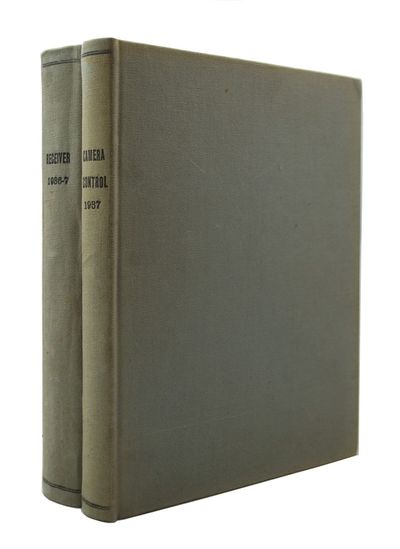 by LUBCKE, Harry R.
Records of Los Angelesí First Television Station LUBCKE, Harry R..[& others.] Technical Records of Los Angeles television Station W6XAO. [Los Angeles: 1935-1937]. Two light green cloth binders. Quarto (11 x 8 1/2 inches; 280 x 215 mm). Approximately 450 pp total, labeled on spine: "Receiver / 1936-7" & "Camera / 1937," Los Angeles, 1935-1937, being the technical records of Los Angeles television station W6XAO, consisting of manuscript material, typed documents, original circuit diagrams, blueprints, photographs, etc. Cloth with some sunning and foxing. Overall about fine. ìLos Angeles Cadillac dealer Don Lee branched out into the broadcast world in 1926 with the purchase of KFRC in San Francisco. He continued to buy a number of stations along the California Coast and formed the Don Lee network, which was affiliated with Columbia Broadcasting System. He was given a license to begin experimental television broadcasts in 1931 with station W6XAO. The early broadcasts consisted of still images at a low resolution, but by the time of the present technical records, and under the leadership of Lee's son Tommy Lee, the station was pushing the boundaries with higher resolution images and synchronized picture and sound. The technical mastermind behind the station was young engineer Harry R. Lubcke, who had begun his career in television working with Philo T. Farnsworth in 1929 and later would go on to be the third president of the Television Academy. Many of the manuscript notes throughout the two volumes are from Lubcke, but also by Wilbur E. Thorp and William S. Klein. Included are notes and plans on ultra high frequency receivers, much on transmitters, many strategies at synchronization, parts lists for various components, technical explorations of particular components and circuits, detailed performance sheets titled ëReception Reports,í which provide some indication of what was broadcast throughout the day, technical analysis of the broadcasts and detailed description of the many experiments and tests the engineers performed. The binder also includes an 8 x 10-inch photograph of Lubcke demonstrating television at California Institute of Technology's Annual Exhibit as well as 3 smaller photographs showing Lubcke standing beside the transmitting antenna atop the Don Lee Building and the receiving antenna at Caltech. The first album ends with some programming sheets for the Paramount news presentation that detail the stories covered including notes on the picture quality. The second album deals with all aspects of the television camera and capturing images: camera design, mount, lenses, lighting, supply lists, signal amplification, much on synchronization, etc. From the second album: ëPuppets offer several advantages totelevision production: (1) they can be illuminated intensely, (2) they are not as expensive as living actors, and (3) they can be operated on small stages.í A fascinating look into the experimental era of television broadcasting. ì(Description from Bonhams). HBS 68465. $10,000 (Inventory #: 68465)
$10,000.00 add to cart Available from
Heritage Book Shop
Share this item