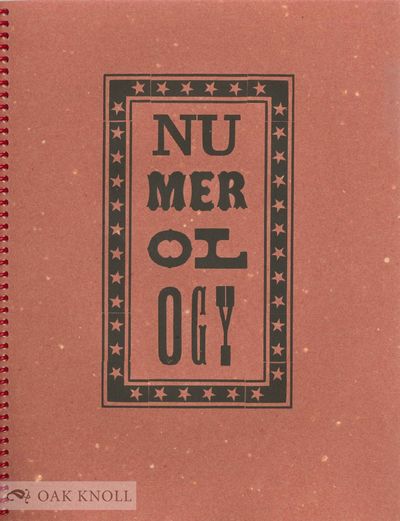 by McMurray, Mark (compiler)
New York: Caliban Press, 2020. semi-stiff red hand-made paper covers, titled in black, spiral-bound. Caliban Press. large 8vo. semi-stiff red hand-made paper covers, titled in black, spiral-bound. (44) leaves. Limited to 100 numbered and signed copies. Printed with black, silver and red inks from Southern Ink Company on found, left over, and scrap papers that have accumulated at Caliban Press over time. Japan, China, Nepal, India, Spain, France, Germany, England, Canada, Mexico, are all represented - including Papeterie St-Armand, Montreal. The numerals are taken from fonts of wood types at Caliban Press. Decorated with the inevitable volvelle and much else. From the prospectus: "Initially conceived as a way to document a growing collection of wood type which eventually filled some 53 cases with some 75 fonts. Then realizing that there was too much type (not a bad thing), for a single volume showing alphabets, figures, punctuation marks, as well as whole words, I decided to devote the first volume to figureswhich is what printers generally call numerals or numbers. Volume 2 is planned to be complete alphabets, with volume 3 for words, phrases, and declarations. (Inventory #: 135843)
$406.00 add to cart or Buy Direct from Oak Knoll Books
Share this item