TALES OF SPACE AND TIME 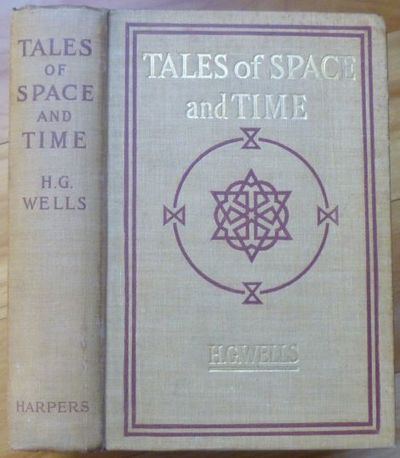 First Edition of this collection of five fantastic tales: "The Crystal Egg," "The Star," "A Story of the Stone Age," "A Story of the Days to Come" and "The Man Who Could Work Miracles." The last story was the basis for the 1936 British film of the same title. This British edition, though dated 1900, was actually published in late 1899; although the American edition is dated 1899, it is considered to have been issued later than this one. "The Crystal Egg," for example, involves Martians -- like THE WAR OF THE WORLDS; an antiquarian shopkeeper discovers that by peering into a certain crystal egg at an angle of precisely 137 degrees, he can see, and ultimately communicate with, Martians who apparently sent the egg as a sort of Eye on Earth. Said communication ends when the shopkeeper is discovered dead in his shop, clutching the egg in his hand. This is a close-to-fine, attractive copy, with a partially-erased decorative ink-stamp on the half-title. There is remarkably little of the cover soil that usually afflicts this light-colored binding -- just a few faint speckles near the upper fore-corner of the front cover, and an even fainter mark on the lower spine. Copies any better seldom turn up. Currey p. 524; Bleiler (Supernatural Fiction) 1678; Hammond C4; Wells Soc. 16. (Inventory #: 14755)
$1,950.00 add to cart or Buy Direct from
Sumner & Stillman
Share this item