Mamma's Lessons on the History and Geography of Palestine, and Other Places Mentioned in the Bible: in Simple and Familiar Conversation 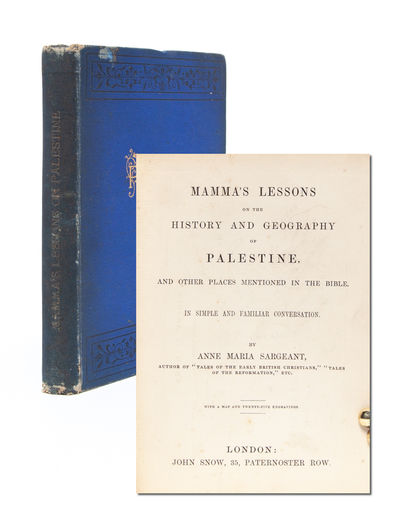 by Sargeant, Anne Maria
London: John Snow, 1849. First edition. Original publisher's cloth binding stamped in gilt, black and blind. Brown coated endpapers. Spine sunned and extremities somewhat bumped and rubbed; binding tight and square. Hinges repaired to front and rear. Contemporary Valentine adhered to front pastedown. Internally clean and unmarked. Measuring 130 x 105mm and collating [2], vi, 154: complete, with folding map to front and 25 engravings throughout. A scarce educational work combining scripture with geography and topography, OCLC reports copies at only 4 libraries (1 of these in the U.S.). It is the only copy currently on the market.

Part religious, part imperialist, the present juvenile work exposes the role women educational writers played in shaping the younger generation's collective identity as British Christians in the Victorian period. "In the Victorian era, the Holy Land drew British scholars, archaeologists, explorers, cartographers, tourists, and missionaries. Its importance to Britain became even more pronounced with the opening of the Suez Canal late in the century, and the discovery of oil in Iraq, piped from Mosul to the Mediterranean via Haifa" (Reuters). During this time, "British support for an increased Jewish presence in Palestine, though idealistically embedded in 19th century evangelical Christian feelings that the country should play a role in Christ's Second Coming, was primarily geopolitical...a result of the 'Eastern Crisis' after Muhammad Ali occupied Syria and Palestine" (Lumen). Writers like Anne Maria Sargeant were in a position to indoctrinate a rising generation of children, normalizing this blend and urging them to see the expansion of British beliefs and global political power as their born duty and birthright. "This little work is not only intended to give a brief history and geography of Palestine," opens Sargeant, "but to draw the attention of the young reader to the narratives, miracles, parables, and prophecies of the holy Scriptures, to which a great many references are made." Using familiar words, and by associating a far away place and culture with British Christian beliefs, Sargeant, using the voice of Mamma and the Mother Land, encourages child readers to gain a sense of ownership over Palestine. (Inventory #: 4210)
$1,250.00 add to cart or Buy Direct from
Whitmore Rare Books
Share this item