Thoughts on Domestic Education; The Result of Experience 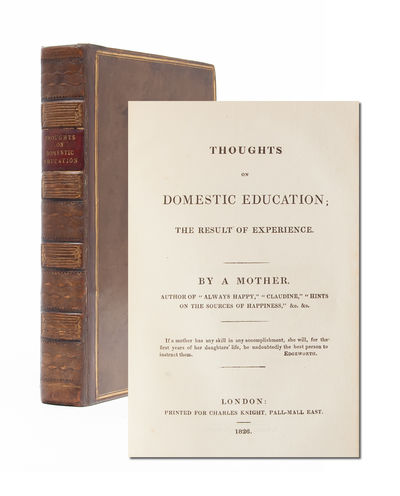 "Little is known of the life of Maria Elizabeth Budden, but in the early years of the 19th century she gained a reputation as a writer for children, both via her didactic fiction and her True Stories series of history books intended for the young. Her books promote home precepts of obedience, industry, humility, and striving for self-improvement, invariably insisting that these are the only way to virtue and therefore to happiness" (Course). Her books were in such demand that for a time she was producing a minimum of one novel a year for her publisher. Thoughts on Domestic Education is both a logical addition and an outlier within her oeuvre, for it picks up the same didactic thread but in a more overt manner. Rather than tuck lessons within narratives, here she speaks directly to the best methods of training girls and young women in an array of rigorous subjects, from the classical and modern languages, literature, history, and geography. Drawing on the works of Hester Chapone, Maria Edgeworth, Elizabeth Hamilton and Jane Marcet, Budden advances the value of the Bluestockings' advice on education. She also uses her own position as a wife and mother to defend the women's work from misogynistic attacks she herself had overheard from men: "I would read them, were they the compositions of a Mrs. Hamilton and a Mrs. Edgeworth." Thus Budden uses her positions to advantage, to fill a gap in the market and to create a frame that surrounds the ideas of "Misses" so they can enter into spaces previously banned. (Inventory #: 4255)
$1,850.00 add to cart or Buy Direct from
Whitmore Rare Books
Share this item