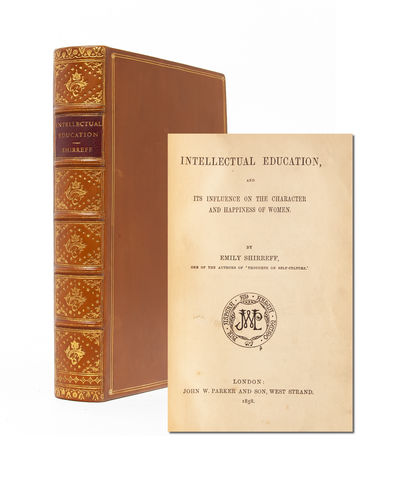 by Shirreff, Emily
London: John W. Parker and Son, 1858. First Edition. Near Fine. Bound to style in full calf with morocco label and gilt to spine. Measuring 200 x 120mm. An exceptionally lovely copy outside and in. Discrete library stamp to verso of title, else unmarked and without any of the foxing associated with the period. Collates vii, [1, blank], 424 pages: complete. A rare and important book on women's education, OCLC reports 19 copies in the U.S., and it has appeared only once in the auction record, over a decade ago. The present is the only copy on the market.

Emily Shirreff was an educational activist central to the development of the kindergarten system and to women's higher education. A co-founder of the Women's Education Union with her sister Maria Grey, she eventually became the second headmistress to Girton College, Cambridge, which allowed women entry to a premier university. Shirreff fully believed that men and women should both receive liberal educations not for practical training in a trade, but for their development as whole people. "The fundamental truth to start from appears to me to be this--that education has one and the same purpose for every human being; and this purpose is the systematic and harmonious development of the whole moral and intellectual nature." Shirreff's book Intellectual Education outlined reasons and a plan for more fully educating young women. In addition to pushing for the early and continued education of girls, Shirreff explains that mothers who didn't have that benefit in their own childhoods should be trained in order to better teach their children. Women, she argues, should learn across a wide range of scientific and humanistic fields, including mathematics and geometry, geology and astronomy, native and foreign languages, history, and reasoning. Ultimately, Shirreff acknowledges that hurdles to women's employment and financial independence have served to justify limiting their educations; but approaching education from the perspective of human betterment reopens those doors. An important early argument for and outline of women's education.