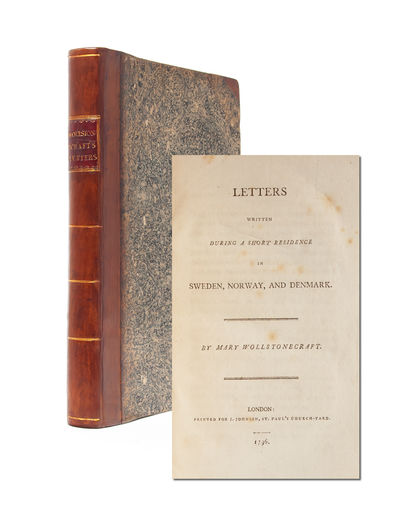 When a Norwegian ship's captain stole valuable cargo from Gilbert Imlay's ship in 1794, the Englishman reached out to his lover, Mary Wollstonecraft, requesting that she travel there as his proxy to obtain compensation. A new mother with a baby in tow, Wollstonecraft nevertheless accepted the charge; and she not only tackled the task set for her by Imlay, she also spent four months traveling to remote destinations, meeting and bargaining with officials, studying local customs, and exploring exotic landscapes. The resulting travel narrative broke new ground at its publication. Wollstonecraft already had become a founder of a feminist movement with her Vindication of the Rights of Woman; and with Letters, the first English-language account of a woman business traveler, she put principles of female independence into action. Her adventurous spirit combined with her command over language "found an enthusiastic public, not least among young poets. The wording of the descriptions of the waterfalls she visited...played a part in inspiring Coleridge's description of the sacred river in Xanadu; and the theme of the book set a fashion for questing, romantic journeys. Byron, Wordsworth, Shelley, and even Mary's as yet unborn daughter all read and followed in Mary Wollstonecraft's footsteps" (Tomalin). A captivating narrative shaped by an unmistakable voice, Mary's husband William Godwin would later proclaim "If there was a book calculated to make a man in love with its author, this appears to me to be the book" (Memoirs). A beautiful, unsophisticated copy of an important work, containing the oft-missing publisher's adverts which comprise the first bibliography of Wollstonecraft.