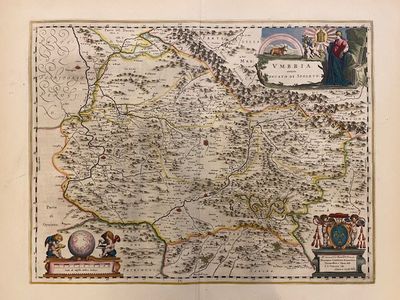 by BLAEU, Joan
Amsterdam: Willem Blaeu. unbound. Map. Engraving with original hand coloring. Image measures 15" x 19.75". This beautiful map of the Umbria region of Italy was issued by Willem Blaeu, published in the Latin edition of "Theatrum Orbis Terrarum" circa 1640. Centered on Spoleto, the map covers what is now the southeastern portion of Umbria, with Perugia, the province's capital, lying just outside the region's border at the western edge of the map. Mountains, towns, and forests are depicted pictorially. The map also labels lakes, rivers and villages. Latin text on verso provides interesting history and description of the region.Three charming cartouches adorn the map, colored by hand with exquisite natural pigments. The title features a cow resting under a rainbow. Another cartouche in the lower right corner features a coat of arms with three bees, and a dedication to Cardinal Francesco Barberino. The scale cartouche in the lower left depict two putti studying a globe. The map is in good condition with minor wear and toning along the original centerfold and minor foxing at places. Latin text on verso.One of the most prolific Dutch mapmakers of his time, Willem Blaeu (1571-1638) started one of the most famous map publishing firms of the 17th century. It was at this time that the Dutch controlled the map trade, and their ornate and beautiful maps had immense popularity. Blaeu and his family worked out of Amsterdam and was instrumental in driving this dominance in his lifetime, and this legacy was continued by his sons. (Inventory #: 300311)
$650.00 add to cart or Buy Direct from
Argosy Book Store
Share this item