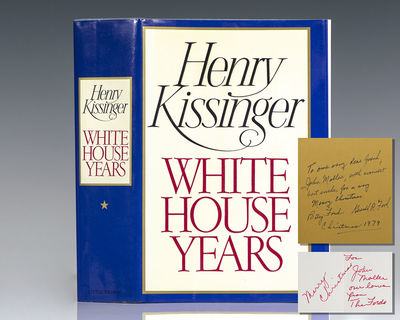 by Kissinger, Henry. [Gerald Ford]
Boston: Little, Brown and Company, 1979. First edition of Kissinger's National Book Award-winning memoir. Octavo, original blue cloth, illustrated with 48 pages of photographs and maps. Association copy, inscribed by President Gerald Ford and signed by First Lady Betty Ford on the front free endpaper in the year of publication, "To our very dear friend John Moller, with warmest best wishes for a very Merry Christmas Gerald R. Ford" and "Betty Ford Christmas 1979." With a small Christmas card inscribed by Betty Ford tipped in which reads, "Merry Christmas John Moller our love from The Fords." Kissinger served as United States Secretary of State and National Security Advisor under the presidential administrations of both Nixon and Ford. When Ford assumed office, he replaced every member of the former Nixon Cabinet with the exceptions of Kissinger and Secretary of the Treasury William E. Simon, a dramatic reorganization referred to as the "Halloween Massacre". During his tenure in the Ford Administration as United States National Security Advisor Kissinger worked to resolve conflicts in the Middle East, Vietnam, and Indonesia. On January 13, 1977, Ford awarded Kissinger the Presidential Medal of Freedom. Fine in a fine dust jacket. Jacket design by Paul Bacon. Author photograph by Tom Blau. A unique example.   An unlikely celebrity who drew fire from across the political spectrum, Henry Kissinger is widely recognized as one of the great American statesmen of the 20th century. According to biographer Robert Schulzinger, 'Kissinger seizes the imagination because he engineered the most significant turning point in United States foreign policy since the beginning of the cold war' (PBS). In this volume, for which he won the 1980 National Book Award for History, Kissinger discusses his work during President Nixon's first term. (Inventory #: 124371)
$2,000.00 add to cart or Buy Direct from
Raptis Rare Books
Share this item