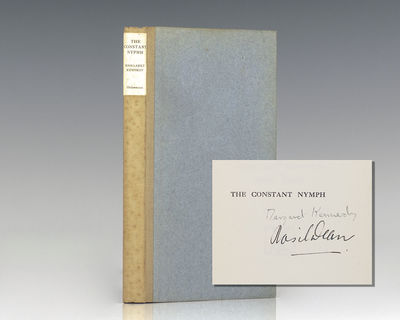 by Kennedy, Margaret and Basil Dean
London: William Heinemann Ltd., 1926. First edition, second impression of the classic stage adaptation of Kennedy's Bohemian novel of the same name. Octavo, original half cloth. Signed by Margaret Kennedy and Basil Dean on the half-title page. In near fine condition. From the library of bibliophile Henry Stuart Maclean Jack with his bookplate to the pastedown. Uncommon signed. The Constant Nymph follows the tale of a teenage girl who falls in love with a family friend, who eventually marries her cousin. The novel sold well from its first appearance, becoming the first novel of a genre sometimes called "Bohemian". Much of its success was due to its then-shocking sexual content. It has been adapted several times for the stage and screen. (Inventory #: 124809)
$1,200.00 add to cart or Buy Direct from
Raptis Rare Books
Share this item