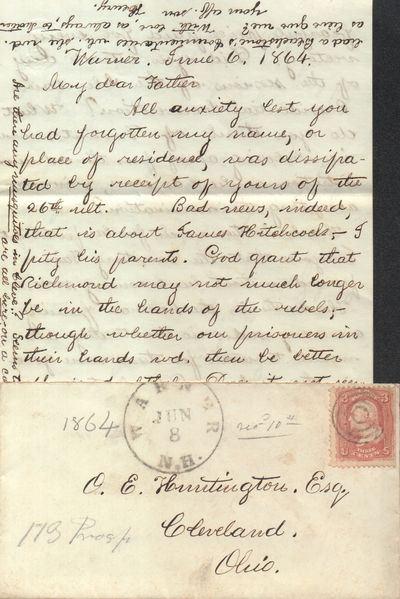 by Huntington, Henry
Very Good. A great letter that mentions the Civil War, John C. Fremont's presidential nomination, and the niceties of being a pastor during that time. The letter is dated "Warner, June 6, 1864." Addressed to "O. E. Huntington Esq., Cleveland, Ohio". Postmark reads "Warner N.H. Jun 8" and 3 cent stamp is still affixed. Letter measures 5" x 8" and is 4pp. Written in a clear hand. Envelope has light soiling, else very good. This letter was written by Henry Huntington of Warner, New Hampshire to his father O. E. Huntington in Cleveland, Ohio. Henry starts off his letter with the subject that was most prominent of the day: the Civil War. "Bad news, indeed, that is about James Hitchcock - I pity his parents. God grant that Richmond many not much longer be in the hands of the rebels;- though whether our prisoners in their lands wd[would] then be better off, is doubtful…How splendidly Grant is driving Lee! If one could only forget the fearful price paid for every victory." In this passage Henry mentions James Hitchcock, a Union soldier captured during the Battle of Drewry's Bluff, Virginia. Hitchcock was sent to the notorious Confederate prison at Andersonville, Georgia and died there because of horrible conditions. James Hitchcock and Henry Huntington were cousins. On the next page there is mention of presidential candidate, explorer and Civil War general John C. Fremont: "Did you attend any of the sessions of the Cleveland Presidential Convention? What do you think of Fremont's course holding aloof fm[from] the administration as he has done, & is now accepting the nomination?" The Cleveland Convention brought together a group of Republicans critical of Lincoln's conduct during the War to form a new political party and nominate a rival candidate to run against him in the 1864 election. The next two pages are mostly about the difficulty of choosing a subject for his sermons; there were just so many subjects to choose from. He asks his father, O. E. Huntington, a long time merchant of Cleveland, for advice. And then there is a sweet postscript: "Are there any mosquitoes in Cleve.? Seems to me there cannot be; they are all here - on a convention." A short letter packed with references to important happenings of that time. . (Inventory #: 022775)
$150.00 add to cart Available from
Back of Beyond Books
Share this item