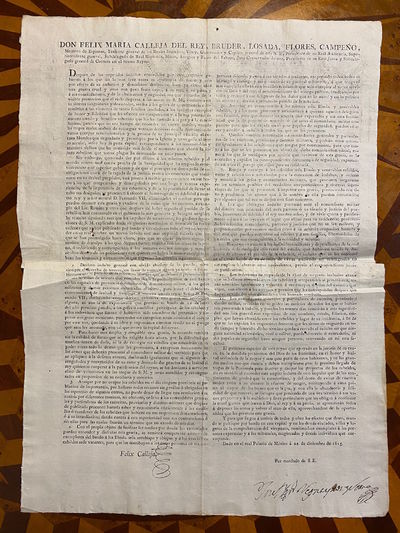 by Calleja, Felix Maria
Very good. Broadside (593 x 430) composed of 2 folio sheets conjoined horizontally across the center, printed in two columns. Dated and signed in type at end: "Dado en el Real Palacio de Mexico a 22 de diciembre de 1815. Felix Calleja." With the MS cypher of Viceroy Calleja, and the complete signature of the secretary, Mr. Joseph Negreyro y Soria. On verso 2 large tax stamps, both for a "quarto" for the year 1815. Two original folds; some unimportant 1 mm wormholes. In the center of the upper blank margin a hole that designates where the broadside had been affixed at the time of publication. A superb copy, the paper stock clean and crisp, and the text perfectly legible. A PIVOTAL MOMENT IN THE MEXICAN WAR OF INDEPENDENCE.

VIRTUALLY UNKNOWN TO HISTORIANS ON ACCOUNT OF ITS SIGNAL RARITY.

The large Bando was issued on Dec. 22, 1815 -- the very day that insurgence leader Father Jose Maria Morales was executed under orders from Calleja. The text of the first paragraph states that "today he [Morales] suffers the capital punishment corresponding to the innumerable and enormous crimes that he has committed almost from the moment he aborted the unjust rebellion that has spread so many plagues in these lands."

Morales's death marked the beginning of the end of the organization of the insurgency. Whereas the "organized insurgency" deteriorated, it was hardly the end of the insurgent movement, or even the loss of its strength. "Instead, the disintegration of a movement that had never been fully integrated led to increased fighting and harmed a colonial regime forced to spend more money and find more men to confront its many opponents." (Guedea, p. 127).

Felix Maria Calleja (1755-1828) was Viceroy from 1813 to 1816, and was characterized by being one of the most cruel and unscrupulous Spanish leaders, and therefore, one of the main enemies of the insurrection. In 1815, the fifth year after the inception of the insurgence, and six before the consummation of Mexican independence in 1821, Calleja here insists on offering the pardon to end hostilities -- effectively an attempt to "stop the bleeding." Calleja's efforts failed of course: the Mexican war of independence lasted for another six years and the royalists were defeated.

The decree offered to grant "a new pardon, broader in scope than those that have been promulgated until now." There are 10 Articles; as it is difficult to assess which Article is more important, we begin at Article 1: "I [Felix Calleja] declare a general pardon with absolute forgetfulness of the past, without any restriction, nor even the expatriation that prevented the Declaration of June 22 of last year [i.e. 1814], to the leaders of the rebels and to the individuals who were, or would have been, members of the alleged and dispersed Mexican Congress, since all without exception will be admitted to pardon for this time, leaving it to their free and spontaneous choice to reside in the place that best suits them, as long as it is not the capital of the kingdom."

In Article 9, Calleja renews the pardon of June 22, 1814, to "the military individuals and dependents of the royal treasury or any other branch of the state, who have had the misfortune to embrace the party of the rebellion, that was granted to them [...]. They may be reinstated in their jobs or obtain other equivalents, after the corresponding 'purification trial.'"

The contents of this rare and little-known decree have long been eclipsed by news of Morales's capture (Nov. 5, 1815) and his trial and execution (Dec. 22, 1815) -- and yet it remains one of the most important historical documents published during this period.

Not surprisingly, surviving copies of this particular bando are rare, as they would have destroyed by insurgents and royalists alike. WorldCat locates just two copies worldwide: UPenn (Sydney S. Keil Collection) and Yale (Henry Raup Wagner Collection). It is equally rare in commerce: combined searches through the millions of records in Rare Book Hub and ABPC produce just one copy, sold at Galerias Louis Morton, Mexico City, 9/23/2010 lot 116 (Monclau Collection). We have been unable to locate any other copy in private or public collections.

Our specimen comes from the Dorothy Sloan Collection of Latin Americana.