I Am a Camera; a play in three acts 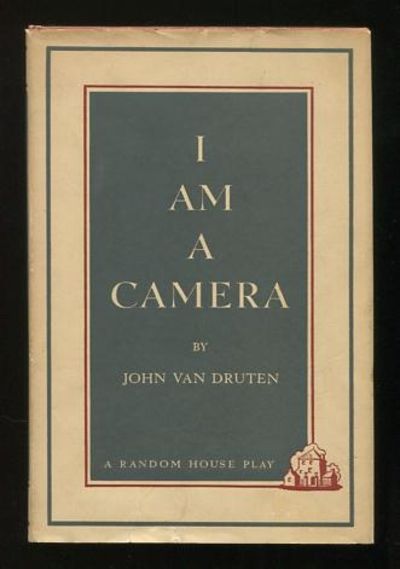 by Van Druten, John; adapted from the Berlin Stories of Christopher Isherwood
New York: Random House. Very Good+ in Very Good+ dj. (c.1952). First Edition. Hardcover. (price-clipped) [a little shelfwear to bottom edge, otherwise a nice clean tight copy, although with a small piece torn out of the upper right corner of pp.25/26; jacket very lightly browned along spine, some minor surface wear and a very faint stain at bottom edge of front panel, a couple of very tiny nicks at top edge of front panel]. (B&W photographs) Van Druten's dramatization of Christopher Isherwood's autobiographical 1939 book "Goodbye to Berlin," set during the late years of the Weimar Republic, just prior to the rise of Hitler and the Nazis -- although the political/historical aspects are rather soft-pedaled compared to the better-known later adaptations ("Cabaret," the 1966 musical play and subsequent 1972 film). (In between, there was also a 1955 British film version, in which Julie Harris reprised her performance as Sally Bowles from the original Broadway production.) For one thing, the entire play takes place in Sally's flat, so essentially the Nazis are talked about but not seen; additionally, although Sally styles herself as a performer, in the play we never actually see her perform. . (Inventory #: 26846)
$35.00 add to cart Available from ReadInk
Share this item
ReadInk
Offered by