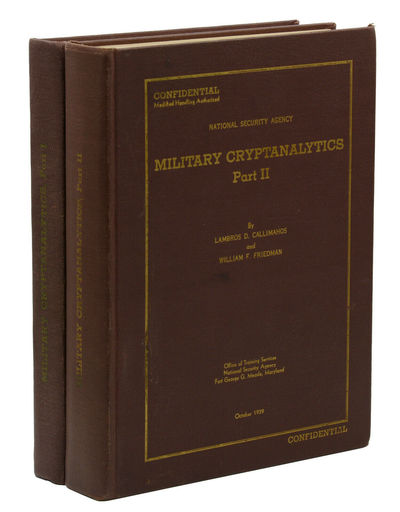 by Friedman, William F.; Lambros D. Callimahos
Fort George G. Meade, MD: Office of Training Services, National Security Agency, 1959. First Thus. Very Good. First thus. iv, 444; vi, 634 pp. Publisher's brown leather lettered in gilt. Two volumes. Very Good with a few stains to leather and edges, contents free of markings. An updated and expanded version of Friedman's text Military Cryptanalytics, prepared with his assistance by Callimahos as a training manual for the National Security Agency. It was such a secretive agency at the time the running joke was that its initials stood for "No Such Agency." Friedman is a legendary figure in the field of cryptology who helped break the Japanese PURPLE code before WWII. Though marked "classified" on every page, these two volumes as well as later installments of the series have long been declassified. Rare. (Inventory #: 140941541)
$2,500.00 add to cart Available from
Burnside Rare Books
Share this item
Burnside Rare Books
Offered by

The Theory of Money and Credit

London : Jonathan Cape , 1934
(click for more details about The Theory of Money and Credit)
View all from this seller>