BERTRAM GROSVENOR GOODHUE ARCHITECT AND MASTER OF MANY ARTS. 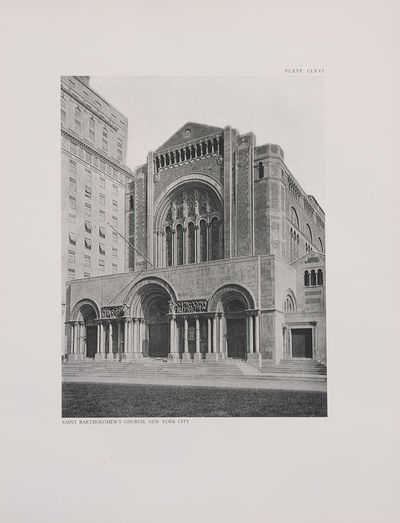 by GOODHUE, BERTRAM GROSVENOR
Edited by Charles Harris Whitaker. Folio, tan and blue linen. Spine a little darkened, bottom of spine starting to ravel. An excellent copy in defective dust jacket (lacking spine and with some chips and splits) but with design intact. A monumental work (Karpel B1186) with four color plates and 273 black and white plates, including photographs and plans.
A key American architect (1869-1924), his work spanned many styles from the Gothic Revival of churches and academic buildings to the Spanish Colonial Revival of the 1915 Panama-Pacific Exposition to Byzantine Revival for St. Bartholomew's to the modernist work of his later churches, court houses and the Los Angeles Public Library, which became the dominant California regional vernacular.
He was also an important book illustrator and designer of the stunning Arts and Crafts style Altar Book of 1896, among others, and a typographer, creating Cheltenham for the Cheltenham Press and Merrymount for the Merrymount Press. (Inventory #: 4626)
$500.00 add to cart Available from
Marilyn Braiterman
Share this item

All books are returnable for any reason within seven days of receipt if carefully packed and fully insured; advance notice requested. Libraries billed according to their requirements. New York customers must add sales tax. Postage is additional.
More from this seller

ONE HUNDRED FABLES, ORIGINAL AND SELECTED.