[TEXAS VS. MEXICO IN 1843]. Message from the President of the United States, to the Two Houses of Congress, at the Commencement of the First Session of the Twenty-Eighth Congress, December 5, 1843 [28th Congress, 1st Session] 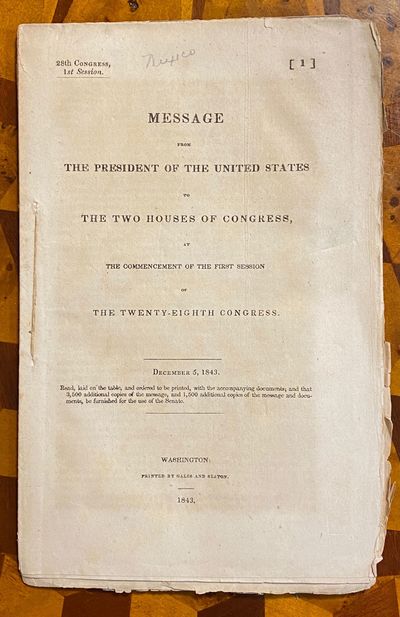 by Tyler, John
Washington DC: Blair and Rives, 1843. First Edition. Good. 8vo. 48 pp., stitched in original self-wraps, edges untrimmed. Final gathering browned on account of the inferior paper stock (in common with at least one other copy known to us), final leaf particularly browned and brittle (chipped), and with two paper repairs. Preserved in a mylar sleeve with lig-free supportive board. President John Tyler addresses the war between Texas and Mexico following the battle of San Jacinto.

Written in December, 1843 -- eight years after Texas had declared independence from Mexico -- the present document shows Tyler's predicament in what can only be described as a crisis of Foreign Policy, namely: whether or not to adopt a laissez-faire position, or to involve the United States military in support of the Texas nation. Shortly thereafter, in April of 1844, Tyler restarted negotiations with the Republic of Texas, culminating with a Treaty of Annexation. However, the treaty was defeated by a wide margin in the Senate because it would have imbalanced the slave state / free state equalibrium between North and South; furthermore, such a Treaty would have surely brought a war with Mexico, which had already broken off relations with the United States. Tyler's "Message" to Congress is poignant:

"The war which has existed for so long a time between Mexico and Texas has, since the battle of San Jacinto, consisted, for the most part, of predatory incursions, which, while they have been attended with much, of suffering to individuals, and have kept the borders of the two countries in a state of constant alarm, have failed to approach to any definitive result. Mexico has fitted out no formidable armament, by land or by sea, for the subjugation of Texas. Eight years have now elapsed since Texas declared her independence of Mexico; and, during that time, she has been
recognised as a sovereign power by several of the principal civilized States. Mexico, nevertheless, perseveres in her plans of re-conquest, and refuses to recognise her independence. The predatory incursions to which I have alluded have been attended, in one instance, with the breaking up of the courts of justice, by the seizing upon the persons of the
judges, jury, and officers of the court, and dragging them along with unarmed, and therefore non-combatant citizens, into a cruel and oppressive bondage; thus leaving crime to go unpunished, and immorality to pass un-reproved.
A border warfare is evermore to be deprecated; and over such a war as has existed for so many years between these two States, humanity has had great cause to lament."