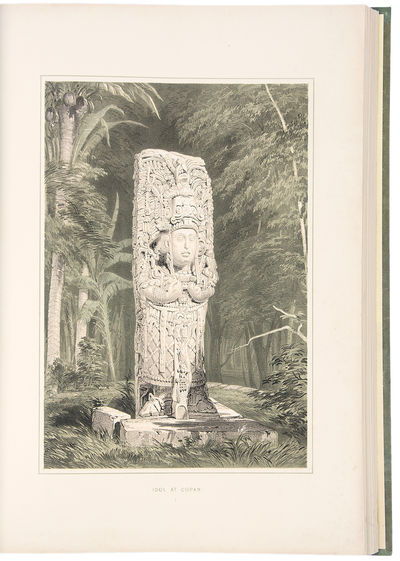 "In the whole range of literature on the Maya there has never appeared a more magnificent work" (Von Hagen).

This beautiful and rare plate book was printed in an edition of 300 copies. It is seldom found in presentable condition, and is one of the first and primary visual records of the rediscovery of Mayan civilization. Until the publication of the work of Alfred Maudslay at the turn of the century, this was the greatest record of Mayan iconography. Frederick Catherwood was a British architect and artist with a strong interest in archaeology. These combined talents led him to accompany the American traveller and explorer, John Lloyd Stephens, on two trips to the Mayan region of southern Mexico in 1839 and 1841. These explorations resulted in Stephens' two famous works, Incidents of Travel in Central America, Chiapas, and Yucatan and Incidents of Travel in Yucatan. These immensely popular works, foundation stones in Mayan studies, were both illustrated by Catherwood and inspired him to undertake the larger portfolio. The Views.. was produced in London, although issued with both London and New York titlepages. Catherwood recruited some of the most distinguished lithographers in London to translate his originals onto stone: Andrew Picken, Henry Warren, William Parrott, John C. Bourne, Thomas Shotter Boys, and George Belton Moore. The beautiful titlepage was executed by Owen Jones. Three hundred sets were produced, most of them tinted, as in the present copy (there is a colored issue on card stock, which is exceedingly rare). The views depict monuments and buildings at Copan, Palenque, Uxmal, Las Monjas, Chichen Itza, Tulum, and several scattered sights. The work of Stephens and Catherwood received great praise, but neither lived to enjoy it long. Stephens died in 1852 of malaria contracted in Colombia, and Catherwood went down on a steamship in the North Atlantic in 1854. "Catherwood belongs to a species, the artist-archaeologist, which is all but extinct. Piranesi was the most celebrated specimen and Catherwood his not unworthy successor" (Aldous Huxley).