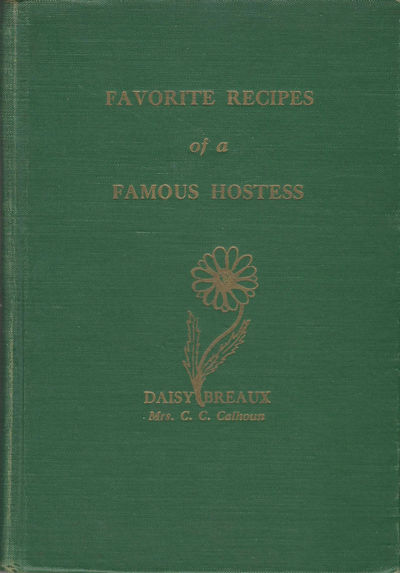 by Breaux, Daisy (Mrs. C.C. Calhoun)
Washington, D. C.: Polytechnic Publishing Company, 1945. Octavo (20.25 x 14.5 cm.), [ii], 183 [i.e., 204] pages. Illustrated. Table of contents and index. Photo-reproduction of typescript with irregular pagination. FIRST EDITION, trade issue. There is also a limited issue, signed and numbered by the author, with an unspecified print run. Peculiarly American, socially ambivalent, half cookbook, half memoir; with three hundred fifty recipes arranged by what today would be called a professional event-planner for high-society functions. The recipes, mercurially, run the gamut, ranging from regional American dishes and casseroles to buffet salads and cocktails. Having learned from servants - one is named "Mom Hannah" in an anecdote - in the frankly unreconstructed South, the author's sensibilities were Dixie upper-crust, but at the same time she was as much participant as supervisor both in the kitchen and at table. She describes a dish called "Hoppin' John," for instance, as "another New Year superstition about the thing to eat for goodluck on that day [...] in South Carolina among the "Buckra," as the darkies call the white aristocrats, as well as among their own color. [...] It is so well known in Charleston that the born Charlestonian is home-sick for it when away. For me it has always seemed a little flat, so in my kitchen I generally had it pepped up with a dash of onion, a clover of garlic, and red pepper." Some entries of interest: Peanut Butter and Bacon, Crabmeat Newburg, Vichyssoise, Oxtail Soup, Kedgeree, Jambolaya, Carolina Cracklin' Bread, Broiled Okra, Sweet Potato Pone, Peanut Corn Oysters, Fried Chicken à la Maryland, Virginia Ham, Smoked Tongue, Tomato Soup Cake, Cocoanut Meringue Cake, Crepes Suzettee Gauloises, Peach Sublime, Mint Julep. ~ Margaret "Daisy" Rose Anthony Julia Josephine Catherine Cornelia Donovan O'Donovan Breaux (1864-1949) was born in Philadelphia, spent her childhood in New Orleans, and attended the Convent of the Visitation school in the District of Columbia. She outlived three husbands, and designed three respective manorial abodes into the bargain. They all figure prominently, in photographs and as subjects of reminiscence, in Favorite Recipes of a Famous Hostess. The first was in Charleston, a manse with Renaissance columns built ten years after her marriage to Andrew Simonds, a banker. After his death in 1905, she converted the house into an inn called Villa Margherita (or Daisy, in Italian), whereafter it surfaced in the news as a destination for heads of state. Her second husband was Barker "Sam" Gummere, another banker, with whom she built Rosedale, outside Princeton. After his death in 1914, she converted that estate into a private academy for girls. In 1918 she married Captain Clarence Crittendon Calhoun, a lawyer practicing in Washington, D. C. and a veteran of the Spanish-American War, originally from Owensboro, Kentucky. Apotheosis ensued: a thirty-room replica of a Scottish castle in the middle of one hundred wooded acres in Chevy Chase - for when it was convenient to escape from the townhouse on Hampshire Avenue. In the event, however, they did not escape often, as their fortunes declined after the 1929 economic crash. The castle became a nightclub, Calhoun died in 1938, and the castle was demolished in 1957 (although the turreted gatehouse survives). ~ At ease in the presence of position and wealth, Daisy Breaux frequently presided over luncheons and dinners at the behest of financial leaders and visiting dignitaries, including President Woodrow Wilson and the Prince of Wales (later Duke of Windsor). Though it cannot be said to characterize her generally, she could at times be attracted to good works; an anecdote recounted in Favorite Recipes of a Famous Hostess involves efforts by Queen Marie of Romania to raise funds for medical relief during World War I. Inspired by the events culminating in passage of the 19th Amendment, she founded the Women's National Foundation in 1921 (as well as its international arm, the Women's Universal Alliance). It was to have no ideological agenda other than to further the influence of women in society, and it represented a transformation in her own thinking: "[The Foundation] first suggested itself to me at the Democratic convention at San Francisco," she recalled in an interview. "I had gone out merely as a spectator, and with very little interest in suffrage - I was reared in Louisiana and I confess to still nursing the old traditions of the South as to men doing the work and the big tilings and women confining their influence to the home and community. As the convention progressed, my eyes were opened. I was simply amazed at the speeches made by the women. They were by far the most forceful and inspiring talks I heard. And when I saw how the men treated them every prejudice I had been harboring was overturned" (Cambridge Sentinel 18, no. 40 (3 December 1921), page 7). Such causes, of course, were not typically taken up by southerners (support for women's suffrage foundered in the South), and her connections provided few lifelines for her organizations, neither of which was long-lived. Mrs. Calhoun returned to Charleston in 1948 and died the following year, at the age of 85. ~ In green cloth, with gilt-stamped titling above an outline of a daisy. [OCLC locates twenty-two copies; in neither Brown nor Cagle]. (Inventory #: 7889)
$60.00 add to cart or Buy Direct from
Rabelais: Thought for Food
Share this item

Good Things to Eat and How to Prepare Them. Over two hundred choice recipes compiled especially for customers and friends of the Larkin Co. by the Larkin Kitchen-Laboratory Department

Buffalo, NY : Larkin Co , 1906
(click for more details about Good Things to Eat and How to Prepare Them. Over two hundred choice recipes compiled especially for customers and friends of the Larkin Co. by the Larkin Kitchen-Laboratory Department)