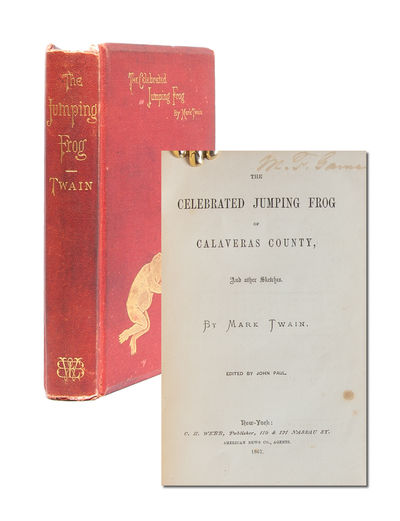 by Twain, Mark [Samuel Clemens]
New York: C. H. Webb, 1867. First edition. Very Good. First issue of Mark Twain's first book. "Copies were bound simultaneously in green, terra cotta, dark brown, lavender, blue deep purple, maroon and red cloth" (MacDonnell, "The Primary First Editions of Mark Twain, Firsts, Vol. 8, no. 7/8). This copy features the gilt stamp of the leaping frog positioned to the lower left of the front cover as usual (some copies have the gilt stamp of the leaping frog in the centre of the front cover, though no priority has been established between the two); it has all of the points of a first issue as delineated by BAL.

Mark Twain, with his account of the jumping frog, produced the most famous tale in California, if not Western, history. This little gem of humor that introduced the famed author's first book gave him international prominence. As his publisher, Charles Henry Webb, noted, "By his story of the Frog, he scaled the heights of popularity at a single jump." Twain's compilation of tales, along with those of Bret Harte, continues to romanticize and popularize the Gold Rush. The story of the lead-loaded frog (named Daniel Webster) made Angels Camp one of the best-known tourist attractions in the gold country. Twain first learned of the story of the jumping frog when he prospected in the vicinity of Jackass Hill in Tuolumne County. On a rainy January day in 1865 Twain and a friend, James Gillis, went into the bar at the Angels Camp Hotel in nearby Calaveras County and heard a gentleman by the name of Ben Coon tell the amusing story of the trained frog. He repeated the story to Artemus Ward, who in turn encouraged him to write it up and send it to Ward's publisher, Carleton, in New York: C. H. Webb, 1867. The tale's popularity spread across America and Europe until it was collected in the present volume.

New York : Alfred A. Knopf , 1927
(click for more details about The Magic Mountain (Signed Limited Edition))
View all from this seller>