A Journal of the Voyages and Travels of a Corps of Discovery under the Command of Capt. Lewis and Capt. Clarke [sic] of the Army of the United States, from the Mouth of the River Missouri through the Interior Parts of North America to the Pacific Ocean During the Years 1804, 1805, and 1806 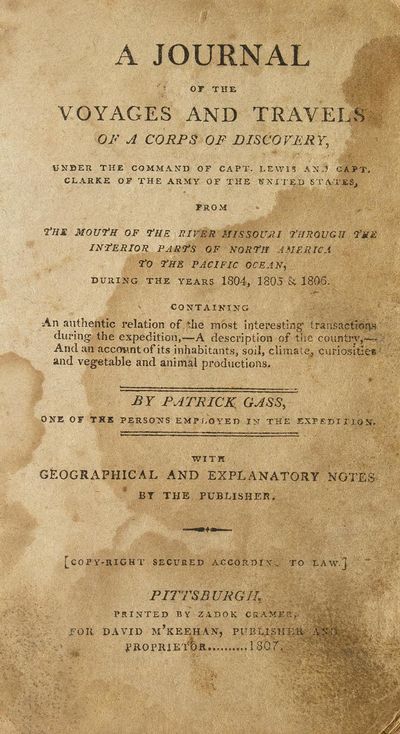 by (Lewis and Clark) Gass, Patrick
Pittsburgh: Printed by Zadok Cramer for for David M'Keehan, Publisher and Proprietor, 1807. First Edition. viii, [9]-262 pp. 1 vols. 12mo (6-5/8 x 4-1/8 inches). Publisher's leather-backed paper covered boards. Well worn, with the paper covering lacking from the rear cover. Corners rounded, approx. eight leaves with edge tears extending from the fore-edge margin, though with minimal loss to text, browning and dampstaining as usual. Housed in a blue morocco backed box. First Edition. viii, [9]-262 pp. 1 vols. 12mo (6-5/8 x 4-1/8 inches). The Earliest Published Firsthand Account of the Lewis and Clark Expedition. First edition of the first full account by a Lewis and Clark expedition participant, preceding the official account by seven years. Gass was a sergeant who, by order of Lewis and at the insistence of Thomas Jefferson, kept a journal of the expedition's activities. "Gass became one of the best-known members of the expedition for several reasons: his key role as sergeant brought his name up frequently in the jourrnals of Lewis and Clark; his account was the first to be published; he was the first to have a biography written about him; and finally, he outlived the other members of the Corps of Discovery by several decades, dying at the age of ninety-nine in 1870" (Wagner-Camp)

"...One of the essential books for an Americana collection" (Streeter).

Printed in Pittsburgh in 1807, the work is rarely found in good condition. This example, even with its faults, a tall copy and desirable as being entirely unsophisticated. Howes G 77 "b"; Wagner-Camp 6:1; Sabin 26741; Shaw & Shoemaker 12646; Smith 3465; Streeter Sale V:3120: Graff 1516; Hill 685; Literature of Lewis and Clark 3.1; Field 594. Provenance: Mark Crawford (very early booklabel on sectional title (p. 9) and early manuscript annotations in the upper margin of most leaves noting the month of the journal entries (Inventory #: 321829)
$12,500.00 add to cart or Buy Direct from
James Cummins Bookseller
Share this item
James Cummins Bookseller Inc.
Offered by

Glimpses of the City of Manáos [drop title from cover]

[New York : Mercantile Illustrating Comapny , 1893
(click for more details about Glimpses of the City of Manáos [drop title from cover])
View all from this seller>