QUEEN OF THE FISHES. AN ADAPTATION IN ENGLISH OF A FAIRY TALE OF VALOIS 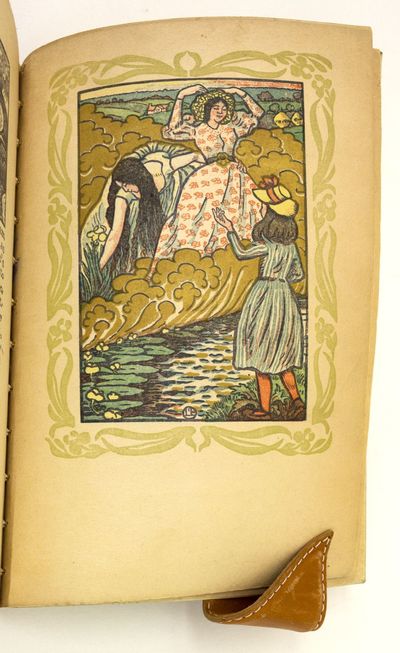 by (ERAGNY PRESS). RUST, MARGARET
Epping [Essex]: Eragny Press, 1894. No. 88 OF 150 COPIES (120 of which were for sale). 193 x 130 mm. (7 5 /8 x 5 1/4"). 4 p.l. (2 blank), 14 pp., [1] leaf (i.e., 12 French-fold leaves).
Publisher's limp vellum, front cover with gilt iris device in upper quadrant, smooth spine (front flyleaf neatly reattached). In a modern cream cardboard chemise with blue leather label on back, inside matching slipcase. Five pages with frame of irises printed in gold or green, iris spray tailpiece on final page of text printed in red, printer's device in colophon, and 16 woodcuts by Esther and Lucien Pissarro, five of these printed in color. Text handwritten and reproduced by process. Printed on light brown paper stock. Franklin, p. 206; Ransom, p. 261; Tomkinson, p. 52. Covers rather splayed and with a hint of soiling, otherwise fine, with almost no signs of use.

This is an attractive copy of the first book issued by the Eragny Press, a whimsical volume that set the tone for the kind of books for which it would become known. Operated between 1894 and World War I by Lucien and Esther Pissarro, the Eragny Press produced charming books of the highest quality but in design unlike the other major private presses at work in England. The delicate wood engravings, the typically patterned paper bindings, and in general the inclination to be fresh and pretty rather than elegant, grand, or luxuriant gave this press a distinctive place in the movement. Lucien, who studied art under his father, the Impressionist painter Camille Pissarro, came to England hoping to get his woodcuts published and searching for an opportunity to make lovely books, two goals that were accomplished with the help of Charles Ricketts, the founder of the Vale Press, who shared his newly created Vale Type with Pissarro. Cave says that the Eragny Press books "had a charm and freshness quite unlike anything to be found in the work of any other private press, and in the printing of colored wood engravings in particular the press excelled." The text here is a retelling of an old French fairy tale, in which a peasant boy and girl escape their mundane existence by transforming into a mighty oak and a splendid fish. The text, Franklin explains, was "photographed from Lucien's handwriting, and so gives a kind of unity with his illustrations." The latter are "far more complex and carefully organized than at first sight; their shadows and forms always delicate and deserving a careful long look. In that way, it is a beautiful book for children, though nobody is or ever was likely to let them get hold of it." A book that would never be readily available given its limited press run, the work is uncommonly encountered for sale.. (Inventory #: ST16360)
$7,800.00 add to cart or Buy Direct from
Phillip J. Pirages Fine Books
Share this item