(BINDINGS - FAZAKERLEY). (FORE-EDGE PAINTINGS). PRE-RAPHAELITISM AND THE PRE-RAPHAELITE BROTHERHOOD The Definitive History of the Pre-Raphaelite Brotherhood by one of its Founders, in Striking, Immaculate Fazakerley Bindings Featuring Six Small Paintings on the Fore Edges 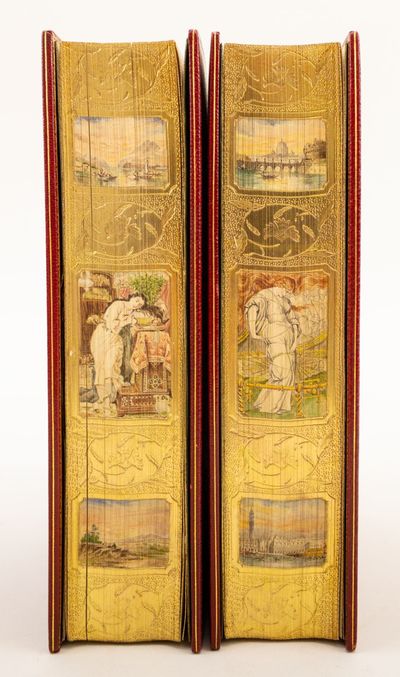 LOVELY CRIMSON CRUSHED MOROCCO, GILT, BY FAZAKERLEY OF LIVERPOOL (stamp-signed on front turn-in), covers with gilt-ruled border, central panel enclosed by French fillet frame, elaborate cornerpieces with curling line emanating from an eight-pointed star, accented by dots and circlets, drawer-handle tools along the sides, raised bands, spine compartments intricately gilt with swirling lines surrounding an eight-pointed star, fleuron tools at sides, gilt titling, turn-ins framed with drawer-handle tools and gilt fillets, fleurons at corners, floral sprigs at center of each side, leather hinges, moss green moiré silk doublures and endleaves, marbled flyleaves, EDGES GILT AND ELABORATELY GAUFFERED, EACH FORE-EDGE WITH ONE LARGE AND TWO SMALL PAINTINGS reproducing works by artists of the Pre-Raphaelite period. Each volume in a red cloth chemise, housed together in a morocco-backed slipcase, the back with raised bands, gilt rules, and gilt lettering.
With 158 black & white illustrations in the text, 33 of these full-page, and 40 PHOTOGRAVURE PLATES reproducing Pre-Raphaelite paintings.

Very faint offsetting from plates, but A SUPERB SET, near-pristine internally, in bindings that look like new, with extremely well-preserved fore-edge paintings.

Written by a founding member of the Pre-Raphaelite Brotherhood, this history of perhaps the most significant modern movement in British art is exquisitely bound, with glittering fore edges displaying replicas of two of the author's best-known paintings. A group of artists fascinated by all things Medieval, the Pre-Raphaelites deprecated the heartlessness and mass production of the industrial age and advocated guild socialism. The Brotherhood was founded in 1848 by painters Hunt (1827-1910), Dante Gabriel Rossetti, and John Everett Millais, who were soon joined by fellow art students James Collinson, Frederic George Stephens, Thomas Woolner, and Rossetti's younger brother William Michael Rossetti. According to DNB, "the Pre-Raphaelite Brotherhood was the most influential avant-garde group in the history of British art. . . . Although this initial grouping was relatively short-lived [1848-54], its influence extended throughout the nineteenth century and reached well beyond Britain. Major artistic and cultural figures such as Edward Burne-Jones and William Morris took up the Brotherhood's ideas, expanded and transformed them." Written near the end of Hunt's life, this history of the "PRB" was, DNB tells us, "intended as a definitive history of the movement."

Known to have apprenticed with John Sutton in Liverpool in 1813, binder Thomas Fazakerley established his own business in 1835 and worked until 1877, after which time his son John continued the firm. Their workshop did not produce bindings in great numbers, but its craftsmen established a durable reputation for fine quality work. Fazakerley is especially well known for delicate paintings on glittering gold fore edges, visible, not when the volume is fanned open, but rather when it is closed--and that is certainly a feature notably on display here. The fore-edge of volume I combines small views of Rome and Venice after Pre-Raphaelite forerunner J. M. W. Turner with a larger central painting after Hunt's own "Lady of Shallott"; the smaller paintings on volume II are a view of Lake Como after Turner and the Flight into Egypt after John Martin, placed above and below a larger replica of Hunt's "Isabella and the Pot of Basil." The illustrations and subject matter here provided inspiration that resulted in one of the most impressive examples of Fazakerley creations that we have encountered, and the sturdy cases have preserved the bindings in near-original condition.. (Inventory #: ST16664)
$20,000.00 add to cart or Buy Direct from
Phillip J. Pirages Fine Books
Share this item

FROM A LARGE BOOK OF HOURS IN LATIN

France first half of 14th century
(click for more details about FROM A SMALL PSALTER-HOURS IN LATIN, WITH IMMENSELY CHARMING MARGINALIA)
View all from this seller>