REGARDING MONETARY APPROPRIATIONS FROM THE STATE OF NEW HAMPSHIRE FOR PUPILS AT THE PERKINS INSTITUTION, AND MASSACHUSETTS ASYLUM FOR THE BLIND, TWO AUTOGRAPH LETTERS, SIGNED BY SAMUEL G. HOWE, 1850 & 1851 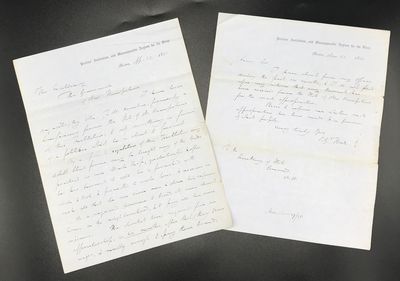 by HOWE, Samuel G.
Two letters on blue letterhead of the Perkins Institution, and Massachusetts Asylum for the Blind. Single sheets, folded, 2 leaves, addressed on the versos of the second leaf, remains of red wax seals, round stamped postmarks. Both letters in very good condition.
The first letter, addressed to the Secretary of State, Concord, New Hampshire, is dated Boston, Nov. 22, 1850. The brief note, approx. 50 words, signed by Howe, states that he has been away from his office for six months and upon his return, discovered that no warrants had been received from the State of New Hampshire "for the usual appropriation. Please to inform me whether such appropriation has been made & in favour of what pupils." The second letter, dated Boston, April 27, 1851, is addressed to His Excellency Samuel Dinsmore, Governor, Concord, N.H. In a two-page, approx. 260 word letter, Samuel Howe writes in support of a former student, J.M. Dunbar of New Hampshire, who has petitioned the state for an appropriation to assist him with living expenses while he is establishing himself in a trade. Howe notes that "By a present regulation of this Institution any adult blind person may be taught any of the trades practiced in our work shop, gratuitously; & after he had learned it well, he is furnished with stock & tools & permitted to work here & receive in cash all that he can earn over & above his expenses." The state assistance would provide money for the petitioner's board "at some decent house in the neighbourhood." Samuel Gridley Howe (1801-1876), a Brown University and Harvard Medical School graduate, was the husband of Julia Ward Howe. With wealthy benefactor Thomas H. Perkins of Boston he founded the Perkins Institution for the Blind, the first chartered institution of its kind in the country. Dr. Howe also developed an embossed letter system for the blind to read, first known as Howe Type and later as Boston Line Type. It was used at Perkins until braille came into common usage at the turn of the century. [Anne Sullivan, a student at the school in the 1880s, later successfully taught Helen Keller]. Samuel Howe was a supporter of educational pioneer Horace Mann, and of Dorothea Dix in her efforts on behalf of the insane. [see his biography in the DAB]. (Inventory #: 65886)
$250.00 add to cart or Buy Direct from
Bartleby's Books
Share this item