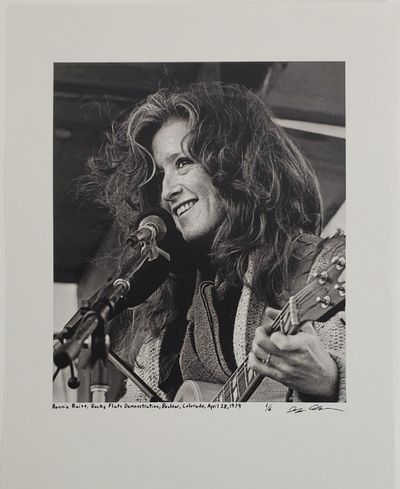 
Jerry said: "Bonnie and Jackson Browne came to this anti-nuclear weapons demonstration to entertain the 25,000 protestors. Rocky Flats produced triggers for hydrogen bombs, and by the time this demonstration took place the plant had made over 50,000 triggers-for enough bombs to destroy the planet many times over. Bonnie and Jackson helped to energize the protest by giving powerful performances and speeches. The plant finally closed in 1989, after many scandals uncovered by the FBI, including leaks of plutonium into the air and water around Denver, Colorado.". About the artist:


Second Story Books is pleased to present a collection of photographs taken by Jerry of leading figures in the entertainment industry between 1967 and 1996. Most of these photographs have never before been published. All are signed by Jerry and are part of limited edition runs. 1342513. Arts & Antiques. (Inventory #: 1342513)
$600.00 add to cart or Buy Direct from
Second Story Books
Share this item