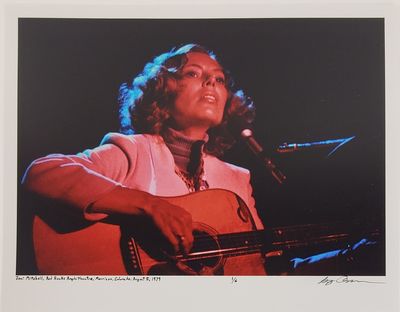 
Jerry said: "The concert was threatened by thunderstorms, a common occurrence at Red Rocks in the summer. In fact, Joni had to stop performing for about 30 minutes. After the storm passed the show continued with a very wet but excited audience and a superb Joni performance."


Shelved Rockville. About the artist:


Second Story Books is pleased to present a collection of photographs taken by Jerry of leading figures in the entertainment industry between 1967 and 1996. Most of these photographs have never before been published. All are signed by Jerry and are part of limited edition runs. 1342517. Arts & Antiques. (Inventory #: 1342517)
$600.00 add to cart or Buy Direct from
Second Story Books
Share this item