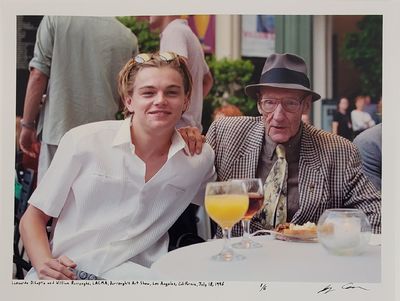 
Jerry said: "In the summer of 1996, I was taking photos of William and Allen Ginsberg at the opening party for Burroughs's exhibit in Los Angeles. A very young Leo approached me, said he was a big fan of both writers, and asked if I would take his photo with them. I recognized him from Gilbert Grape and asked him about any newer films. He told me that he had just finished Romeo and Juliet and was thinking about being in a new film, Titanic. The rest, of course, is history. I spoke to Allen and William and both were happy to be photographed with him."


Second Story Books is pleased to present a collection of photographs taken by Jerry of leading figures in the entertainment industry between 1967 and 1996. Most of these photographs have never before been published. All are signed by Jerry and are part of limited edition runs. 1342527. Arts & Antiques. (Inventory #: 1342527)
$600.00 add to cart or Buy Direct from
Second Story Books
Share this item