PERSONAL RECOLLECTIONS OF JOAN OF ARC 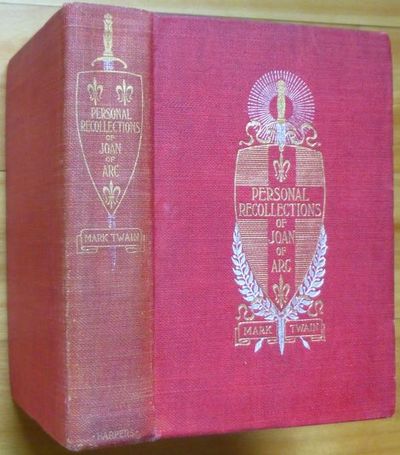 First Edition, first issue, of Mark Twain's last completed novel -- a fictionalized (and romanticized) version of the life of someone with whom he was fascinated, written as a purported 1492 memoir by Joan of Arc's page and secretary late in his life. Twain said "I like Joan of Arc best of all my books; and it is the best; I know it perfectly well. And besides, it furnished me seven times the pleasure afforded me by any of the others; twelve years of preparation, and two years of writing. The others needed no preparation and got none" [quoted by Greenman]. JOAN OF ARC first appeared serially in Harper's Magazine -- anonymously, since Twain did not want the public to expect (and be disappointed by the absence of) his customary humor; however, he did become known as the author, and for this 461-page first edition his name, though absent from the title page, is present on the binding. This copy is from the first issue, with "The Abbey Shakespeare" as the first book on the ad leaf. It is a near-fine copy, with very little wear; as is almost always the case, the red buckram is faded on the spine, though less than usual. This is one of Twain's less-common titles. Blanck 3446. (Inventory #: 14771)
$495.00 add to cart or Buy Direct from
Sumner & Stillman
Share this item