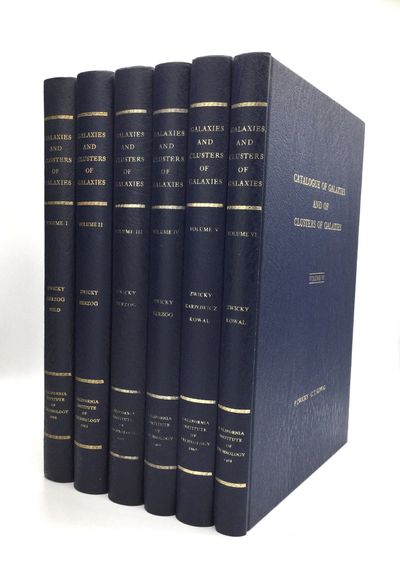 by Zwicky, Fritz with the collaboration of Emil Herzog and Paul Wild
Pasadena, California: California Institute of Technology, 1968. First Edition. Hardcover. Very good. Emil Herzog's set, with his ink signature to the front flyleaf in the first volume. A pioneering work, based on extensive research conducted at Caltech and Palomar Observatory. While the delineation of the clusters on the 48-inch Palomar Schmidt plates was Zwicky's work, all the measurements of the tens of thousands of individual galaxies were Herzog's: photographing each field with the 18-inch Palomar Schmidt, measuring coordinates, and preparing finding charts. In addition, he determined the apparent magnitudes of the brighter galaxies by schraffier guided plates and a flyspanker. For the fainter objects, where the schraffier images were too washed out to be manageable, he found that his nearsightedness made schraffier images unnecessary. His familiarity with the 48-inch Schmidt plates led him to be one of the first to be aware of the character of the large-scale distribution of galaxies. Later, the Swiss-born Herzog (1917-98) taught astronomy at the University of Southern California and mathematics at Cal Poly Pomona, serving as department chair from 1974 to 1980. Quarto, six volumes. Original blue buckram bindings, with gilt titles. Mild fading to the spines, with a small spot to the front board of the first volume; otherwise a very good set. (Inventory #: 73791)
$1,000.00 add to cart Available from Johnson
Share this item

PETROLEUM AND NATURAL GAS IN OKLAHOMA

San Francisco : Level Press , 1975
(click for more details about THE HASHEESH EATER)
View all from this seller>