THE COOLIE TRADE [IS] WORSE THAN THE AFRICAN SLAVE TRADE." An important letter from the "Father of the American Industrial Revolution" which scathingly condemns the Coolie Trade and pleads for its prohibition on U.S. flagged vessels 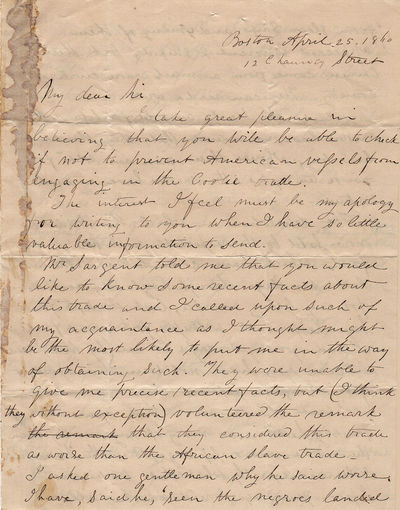 by Francis C. Lowell probably to Congressman Thomas Dawes Eliot
Boston, MassachusettS, 1860. Unbound. Very good. Three-page letter from Francis C. Lowell, the "Father of the American Industrial Revolution" Although unaddressed, the content makes it clear he was writing to Congressman Thomas Dawes Eliot, the most vociferous American opponent of the Coolie Trade. Glue remnants along the left border.

In this letter, Lowell requests that the Congressman "check if not to prevent American vessels from engaging in the Coolie trade" and rages against it.

"I called upon such of my acquaintances [who] consider this trade . . . worse than the African slave trade. I asked one why he said worse. I have, said he, seen the negroes landed from the ships and many of them appeared ignorant & stupid, but these Chinese come from a much more civilized country. . .. He added the blacks are sold for life & we masters have an interest that they should live long, whereas these men are sold for five or ten years & the masters have no such interest. The detestation in which this trade is now held . . . have come to us within the last two days through England. . .. The Coolies are or have been engaged in putting guano on board ships at the Chinese Islands. Your committee might learn . . . how these men are treated there at the guano island & whether a China man or any other man would voluntarily have subjected himself to such treatment. . .. The worst features of this trade are so revolting that . . . it throws an air of improbability over the whole affair. The least startling & most common facts about the trade are quite enough to excite the public indignation & to justify your Committee in any measures they may wish to introduce for the suppression of this trade in American vessels. The English & French will no doubt continue to carry on this most profitable trade and I hope we shall let them have the whole benefit of it." . The "coolie trade" refers to the importation-by force or deception-of Asian (primarily Chinese or Indian) laborers into European-owned plantations as substitutes for slave labor.

It was infamously and hypocritically developed and aggressively pursued by Great Britain at the height of the British attempt to destroy the African slave trade. The British began by importing 200 Chinese to Trinidad in 1806, after ending the slave trade. By 1838 over 25,000 East Indians had been taken to the British East African colony of Mauritius.

Indian coolies were mainly exported by the British to their own colonies, however between 1847 and 1874, up to 500,000 Chinese coolies were imported to British, French, Dutch, and Spanish colonies in the Americas, Africa, and Southeast Asia. Some of the worst abuses suffered by coolies were to the Chinese workman who had signed contracts to harvest guano, the precious "white gold" bird-dropping-fertilizer, from islands in the Pacific.

Lowell's and Eliot's efforts resulted in passage of the 1862 Act to prohibit the Coolie Trade by American Citizens in American Vessels.

(For more information, see Coolie Trade in the 19th Century and Schultz's American Merchants and the Chinese Coolie Trade 1850-1880, both available online.)

A rare and important testament to burgeoning American attempts to preclude U.S. involvement in the Coolie Trade. (Inventory #: 009709)
$750.00 add to cart or Buy Direct from
Read'Em Again Books and Paper
Share this item