THE CAPPITALISTS HERE IS DOWN ON US MECHANICS FOR STARTING A FOUNDRY." Letter from a foundry worker to his nephew describing the start-up of a mechanic-owned stove foundry in Philadelphia 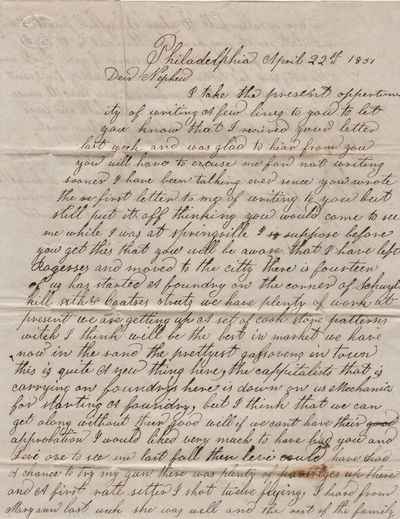 by John D. Painter
Philadelphia, Pennsylvania, 1837. Unbound. Very good. One-page letter, dated "April 22st 1837" from a Philadelphia mechanic describing stove foundry he and thirteen other workers had just started in within the city that earned the ire of local "cappitalists." No mailing envelope, letter only. A transcript will be provided.

In this letter, Painter informs his nephew that he

"moved to the citty there is fourteen of us has started a foundry on the corner of Schuylkill & Coatses streets have plenty of work at present we are getting up A set of cook stove patterns witch I think will be the best in market we have now in the sand the prettyest gass ovens in town this is quite a new thing here, the cappitalists that is carrying on foundrys here is down on us Mechanics for starting a foundry, but I think that we can get along without their good will if we cant have their approbation. . .. We live in callowhill St above Schuylkill fourth I don't calculate on staying here for the rent is to high and it is to far from the foundry if you should come to the citty you had better come to the foundry for I can't tell where I will move to from here . . . direct [mail] to Phila Mechanics foundry corner of Schuylkill Sixth and Coatses St." . In the early 1820s iron molders (foundry workers) began to complain about low wages, long hours, and forced use of company stores. By 1833, some molders had formed a rudimentary and ineffective union in Philadelphia while others joined fraternal organizations to provide insurance and care for injured or sick co-workers.

Some, like Painter and his associates, began to establish their own worker-owned foundries. These generally proved to be unsuccessful, and the molders eventually returned to factories owned by capitalists.

It wasn't until the 1850s that unions began to gain a foothold within the iron industry when the Journeymen Iron Molders Association and the Stove and Hollowware Molders Union both formed in Philadelphia.

Painter's mention of his "prettyest gass ovens . . . quite a new thing" is quite timely as even though they were not common, gas ovens had been invented in the early 1820s.

(For more information see "National Union of Iron Molders" at encyclopedia.com and Food Crumbles, both online.)

A nice piece of evidence documenting early non-union labor activism and an especially early use of the term "cappitalist". Although the Oxford English Dictionary states that the first use of the word 'capitalist' occurred in William Makepeace Thackeray's 1857 novel, The Newcomes, it appears in several earlier publications: Young's 1792 consolidated journal, Travels in France; Child's 1833 abolitionist text, An Appeal in Favor of That Class of Americans Called Africans; and Parker's 1852 Discourse on the Death of Daniel Webster. (Inventory #: 009708)
$350.00 add to cart or Buy Direct from
Read'Em Again Books and Paper
Share this item