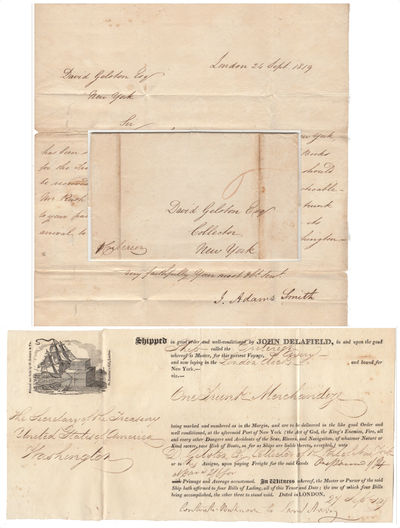 1819 · London to New York for delivery to Washington, DC

by Related to J. Adams Smith, Richard Rush, David Gelston, and John Delafield
London to New York for delivery to Washington, DC, 1819. Envelope or Cover. Very good. This one-page stampless folded cover is datelined "London 24 Sept. 1819', signed by J. Adams Smith, and addressed to David Gelson. It was carried on the ship Criterion, as noted in the low er left corner, and assessed a six-cent port-of-arrival fee as indicated by the manuscript "6". It has two docketed notes. One, probably by Gelson reads, "J Adams Smith / 24 Sep 1829 / trunk books" and a second, in a different hand, "Secretary / 28 Feb 1820 forwarded by Your Obedt Sevt / John Delafield". The accompanying Delafield shipping document dated "24 Sep 1820" is addressed to "The Secretary of the Treasury". In nice shape with some short marginal splits along mailing folds and a chip where its sealing was broken upon open.

The letter reads in part:

"By the Criterion . . . has been sent from the American Legation a Trunk of Books for the Treasury department. . .. Mr. Rush our minister requests me to recommend this to your particular care and begs . . . to have it forwarded with the least delay. . .." . J. Adams Smith, the son of New York Representative William S. Smith (the son-in in law of former President John Adams) was appointed Secretary of the American Legation in London by President Madison at the request of and as a favor to his father.

Ambassador Richard Rush, the son of founding father Benjamin Rush and a friend of future President John Quincy Adams, John Adam's son, was appointed by his friend President Madison to be the Attorney General in 1814 and later to the London position when its former occupant, John Quincy Adams, returned to become Madison's Secretary of State.

In 1825, Rush returned to the United States where then President John Quincy Adams appointed him to be the Secretary of the Treasury.

David Gelston, a New York politician and merchant, was appointed Collector of the Port of New York by President Jefferson in 1801 and served for twenty years.

The Collector position, described as the "prize plum of Federal Patronage" in the 14 June 1922 edition of the New York Times, was the highest paid U.S. government employee as he received a percentage of the collected customs fees and fines. Kickbacks from this position were regularly paid to the political party of the appointer.

John Delafield was a somewhat shady New York import merchant and even more questionable banker and financial speculator, who once petitioned friends in Congress to provide payment for some questionable Revolutionary War loan certificates he purported to own. Although two proposed payment bills were introduced on the House floor, both were defeated.

A fascinating pair of documents that testify to the profitable crony connections between family, friends, and political associates during the early years of the United States. (Inventory #: 009733)
$150.00 add to cart or Buy Direct from
Read'Em Again Books and Paper
Share this item