BY THE WAY OUR COMPANY HAS BEEN MADE A DYNAMITE BATTERY WE CARRY 5 DYNAMITE GUNS TAKES 10 MEN TO A GUN." Spanish-American War letter home from a soldier en route to Puerto Rico describing his role in employing the most advance artillery of the time 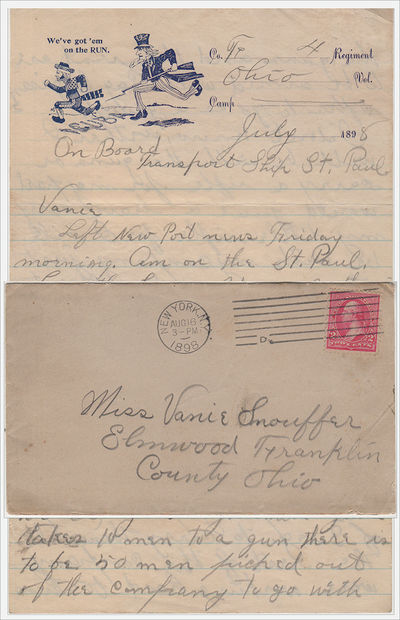 1898 · Written "On Board Transport Ship St. Paul" and mailed from "Military Station No. 1. Porto Rico

by William V. Preston
Written "On Board Transport Ship St. Paul" and mailed from "Military Station No. 1. Porto Rico: Co. F, 4th Regiment, Ohio Volunteers, 1898. Envelope or Cover. Very good. A four-page letter on patriotic stationery featuring an illustration of Uncle Sam driving a Spanish soldier from Cuba at bayonet point. Its identifies Preston's location as "Military Station No. 1. / Porto Rico", but since that post office did not open until 3 August, no Puerto Rico postmark appears on the envelope which was franked with a two-cent Washington stamp (Scott #267) and canceled with a New York City machine postmark upon its arrival on 16 August. In nice shape.

In this letter Preston writes

"Have the honor of being on the ship that is commanded by Capt. Sigsbee the Capt of the Battle Ship Maine he is not by a long way the man the papers claim him to be the sailors all hate him. . .. Our company has been made a dynamite Battery we carry 5 dynamite guns takes 10 men to a gun there is to be 50 men picked out of the company to go with the guns and the rest are to be armed with Crag Jorgisens rifles to go as a guard. I don't know wether I will be with the guns or carry a rifle. . .. We have the honor of being the only Vol. Company allowed to carry the dynamite guns . . . and have the only ones in the service. . .. Have been out of sight of land for 3 days and nights . . . will be glad to see land again even if it is an enemys country We are all prepared for them. soon the war will be over . . . if we can get our guns on them. . .. So when you read of the Dynamite Battery you will know where I am. . .." . Dynamite guns were invented in the early 1880s to allow the use of explosive (dynamite) ammunition. At the time, the instability of explosive shells precluded use of traditional cannon. Instead, dynamite guns propelled shells using compressed air. They were first purchased by the U.S. Army in 1894 for use at coastal forts. While those guns could rely on a steam-driven compressor to provide an air source, that was impractical for field use.

Refinements produced the Sims-Dudley gun, which used an explosive smokeless powder charge to compress air in a separate chamber that was used to fire projectiles filled with nitroglycerine instead of dynamite. The army purchased 16 of these thousand-pound field guns which were used during Spanish-American War.

>p>In an after-action letter, the F Company commander reported that since transport horses were unavailable, his men dragged the heavy guns for two miles and carried twelve 260-pound shells that they used to silence the Spanish defenders of Guyama.

A scarce first-hand account of the use of dynamite guns, which certainly must be among the earliest letters mailed during the U.S. occupation of Puerto Rico.

At the time of listing, nothing similar shows in the records of Rare Book Hub, Stamp Auction Network, Worthpoint, nor OCLC. (Inventory #: 009731)
$750.00 add to cart or Buy Direct from
Read'Em Again Books and Paper
Share this item