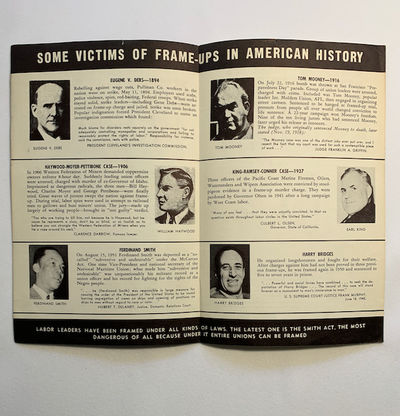 by Trade Union Committee for Repeal of Smith Act and Other Anti-Labor Legislation
San Francisco, CA: Trade Union Committee for Repeal of Smith Act and Other Anti-Labor Legislation, 1952. First Edition. Paperback. Very Good. FIRST EDITION. Broadsheet folded once. [4] pp. 11 half-tone illustrations of labor leaders; text clean, unmarked. Bifold; shelf wear, especially to the extremities. UNK621-002. Very Good. FIRST EDITION of this trade union advocacy group's handbill educating the public on the dangers of the Smith Act, which was passed out of joint conference committee June 17, 1940 and became effective on June 28, 1940. Formally known as the Alien Registration Act, the act set criminal penalties for advocating the overthrow of the US government by force or violence, and required all non-citizen adult residents to register with the federal government. The first page of the tract argues that current prosecutions in Los Angeles were based on charges of conspiracy to advocate force and violence, but that those charged under the Smith Act were the victims of employer's efforts to prevent union organizing. Pages 2 and 3 discuss 6 examples of this legal strategy to destroy the efforts of Eugene V. Debs, the Western Federation of Miners in the Haywood-Moyer-Pettibone Case of 1906, Ferdinand Smith, Tom Mooney, The Pacific Coast Marine Firemen, Oilers, Watertenders and Wiper Association (the King-Ramsey-Conner Case, 1937), and Harry Bridges; these cases are illustrated with half-tone illustrations of the principals in each case. Page 4 highlights the "frame-ups" of labor organizers in Hawaii (Jack Hall), New York (Louis Weinstock), and Los Angeles (Franck Spector, Philip "Slim" Connelly, and Ernest Fox, 3 of 14 organizers charged under the Smith Act in June 1952. All the LA defendants were convicted of Smith Act violations in July 1952 and were sentenced to 5 years in prison and a $10,000 fine. (Louis Weinstock was likewise found guilty of Smith Act violations in New York, and after he served his time in prison, paid his $10,000 fine in installments over 19 years.) The convictions in the Los Angeles case were appealed, and the Smith Act was rendered null by the US Supreme Court decision in Yates v United States on June 17, 1957. 4 copies Worldcat. (Inventory #: UNK621-002)
$50.00 add to cart Available from
John Howell for Books
Share this item