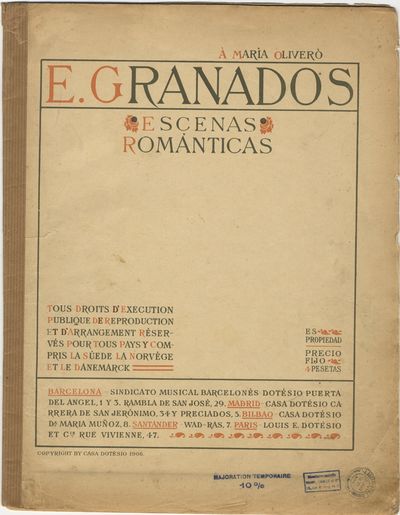 Catalan pianist and composer Enrique Granados "appeared frequently in recitals, concerto performances and chamber music alongside such prominent figures as Thibaud, Saint-Saëns and Casals, a personal friend, for whom he composed several pieces. He became well known for his impromptu improvisations... Granados's musical language is rooted in mainstream European traditions, frequently blended with elements derived from traditional Spanish (and less often Catalan) folk music... [His] foremost strength was undoubtedly his melodic gift, which can be best appreciated in his songs and piano works... Granados made a significant contribution to the development of a national Spanish school and, though he is often considered more conservative than Albéniz or Falla, the degree to which native elements inform his music should not be underestimated... " Mark Larrad in Grove Music Online. (Inventory #: 36347)
$83.00 add to cart or Buy Direct from
J. & J. Lubrano Music Antiquarians
Share this item