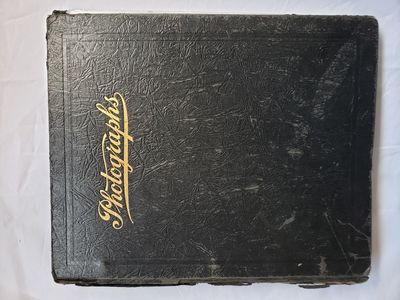 by [African Amerian] [HBCU] , Education
[Education] [ Photo album by Class of 1942 at Tougaloo College. 1938-1942. 78 original silver gelatin print photographs of the students taken in the 1930s-1940s, Assembled later in the early 1970's to celebrate the 30th class reunion for Class of 1942 at Tougaloo College in Mississippi. Ephemera from wedding invitations, college brochures, and a complete roster of the class. Original black boards. "Photographs" on front cover in gilt. 12.5 x 10.5 inches. Photographs and ephemera collected in protective sheeting with original 3-ring binding. Photograph size range from 2.5 in x 1.5 in to 10 x 8 inches. Scattered, brief captions for photographs usually identifying the sitter. 39 names listed on the Class of 1942 roster with current address listed all across the South, but also places as far away as New England, Chicago, and Los Angeles. A 1940s pamphlet for the school describes it as "the only A-rated college for Negroes and the only liberal arts college for Negroes in the state of Mississippi." Photographs of friends and classmates, along with occasional photographs of campus. A few women pose outside Holmes Hall at Tougaloo, and another photo offers an interior view of dormitory "Room 55" starkly decorated with a pair of twin beds, a few pennants on the wall. Many photos of women posing in evening dresses, about to leave for an event, as well as casual snapshots of outings. In addition to images around Tougaloo, students also visited friends at other Historically Black Colleges and Universities, including Tennessee State University and Dillard University. Includes snapshots from trips and outings together around the country. Photos from Washingtion, D.C., the Thousand Islands archipelago at the US-Canadian border, Mackinac Island in Michigan, and at Lake Michigan in Chicago. One image of 5 men of bicycles reads "From USS Alabama"; the Alabama was commissioned in 1942 and was an important battleship in the Pacific Theater in WWII. When the United States entered World War II in December 1941, the Navy's African-American sailors had been limited to serving as Mess Attendants for nearly two decades. However, the pressures of wartime on manpower resources gradually forced changes; while the Navy remained racially segregated in training and in most service units, in 1942 the enlisted rates were opened to all qualified personnel. In 1944, further strides were made when the Navy commissioned the first ever African-Americans officers. Tougaloo College is one of the United States' premier historically black colleges and universities (HBCU) in the nation. The school was founded in 1869. from 1871 until 1892 the college served as a teachers' training school funded by the state of Mississippi. Tougaloo remained predominantly a teacher training school until 1920 when the College ceased to receive aid from the state. Courses for college credit were first offered in 1897, and the first Bachelor of Arts degree was awarded in 1901. Some wear to outer hinges of album binder, loose but holding. Content in excellent condition. (Inventory #: 17163)
$1,200.00 add to cart Available from
Share this item
Max Rambod Inc.
Offered by


(click for more details about First Edition Signed Copy of Lindbergh's The Spirit of St. Louis)