THE LIFE AND DEATH OF COLONEL ALBERT JENNINGS FOUNTAIN 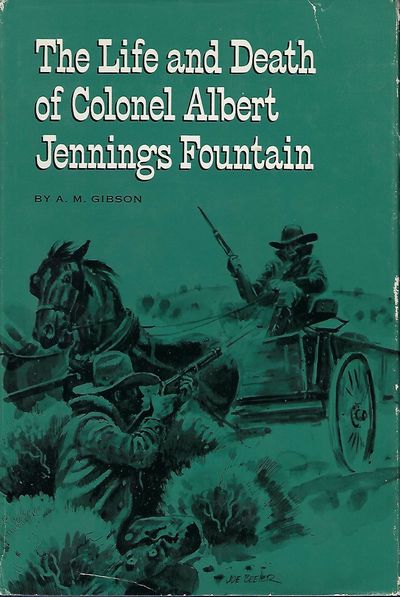 by GIBSON, A.M.
Norman: University Of Oklahoma, 1965. First Edition. Signed presentation from Gibson on the front endpaper, to Valetta Thomas. Colonel Fountain, a prominent New Mexico Republican, disappeared with his eight-year-old son while driving his buckboard from Lincoln to his home in Las Cruces in January of 1896. Later, a pool of blood and a blood-soaked handkerchief pointed to murder. Oliver Lee and Albert Bacon Fall were indicted, but not convicted, for the murder. Fall later achieved dubious prominence for his role in the Teapot Dome scandal. Also discusses Oliver Lee, Jim Gilliland, Pat Garrett, and others, with a mention of Billy the Kid. Tall 8vo., black cloth in dust jacket; 301 pages. Illustrated.. Very Good (covers very nice; contents clean & tight); little edgewear (few short tears, price-clipped) d/j. (Inventory #: 57450)
$75.00 add to cart or Buy Direct from Antic Hay Books
Share this item
Antic Hay Books
Offered by