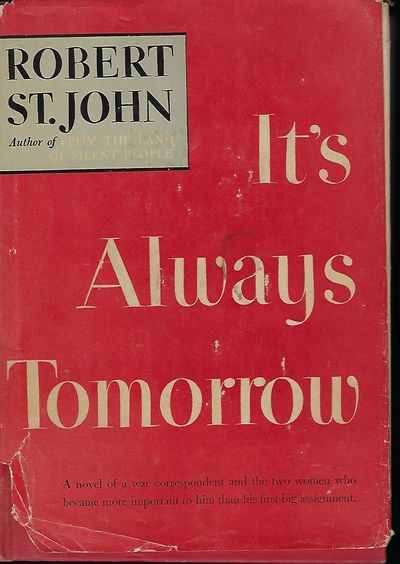 by ST. JOHN, Robert
NY: Doubleday, Doran & Company, 1944. First Edition, later printing. Signed by St. John on a front blank page. With a non-authorial presentation on the front endpaper to Emily Cooper Norris in Concord, New Hampshire. Robert William St. John [1902-2003] was an American author, broadcaster, and journalist. He published a series of exposés about Cicero brothels and other operations of gangster Al Capone. In response, on April 6, 1925, he was accosted by four Capone goons and beaten severely. He brashly complained to the police, and was invited back the next day to meet Capone in person. The gang leader offered St. John money, which the reporter rejected, and apologized, saying he liked newsmen and considered the exposés a form of advertising. Soon after these incidents, Capone purchased the Cicero Tribune in order to silence St. John. St. John then joined the Associated Press and covered Franklin D. Roosevelt's first presidential campaign, then farmed for six years with his wife Eda in New Hampshire. In 1939, he moved to Europe to report on the imminent war for the Associated Press. When Hitler's troops overran Yugoslavia, he was wounded in the right leg by shrapnel while riding in a Greek troop train. He returned home to New York City, where he wrote "From the Land of Silent People," published in 1942, his first book and a bestseller. "It's Always Tomorrow" is about a war correspondent in Europe during World War II. 8vo., decorative red cloth in dust jacket; 248 pages. Very Good (covers nice with one corner little bumped; contents clean & tight); tiny nicks & tears (1.5-inch chip base of spine) d/j. (Inventory #: 57451)
$45.00 add to cart or Buy Direct from Antic Hay Books
Share this item
Antic Hay Books
Offered by